Realme has a reputation for creating value-for-money phones, and Realme Narzo 50 is no different. The phone was first revealed on the 24th of February 2022 and released a week later on the 3rd of March. One of the phone’s biggest advantages is its affordability. Speaking of low costs, the gadget comes at a starting price of ₹12,999 which approximately converts to $170. For colors, you get to choose between Speed Blue and Speed Black. Similarly, the phone also has two variants. The base variant has 4 GB of RAM and 64 GB of internal storage. The higher-priced variant gets you 6 GB of RAM and 128 GB of ROM.

The device has a dedicated card slot that can accommodate an SD and two Nano-SIM cards. As for the connections, Realme Narzo 50 can support 2G, 3G, and 4G. The phone has a glass front with a plastic frame and back. It has a decent build quality, and it doesn’t feel cheap by any means. Coming to dimensions, the phone measures 6.46 by 2.97 by 0.33 inches. It weighs 194 grams, which should be considered lightweight by today’s standards. Realme Narzo 50 sports a 6.6-inch FHD+ IPS LCD screen whose aspect ratio is 20:9. Furthermore, it has a screen-to-body ratio of 84.6% and a PPI (pixels per inch) density of 400.

The phone delivers a good multimedia experience. It boasts a 3.5 mm headphone jack and loudspeaker but misses out on stereo speakers. The Mediatek Helio G96 CPU delivers a smooth overall performance, which is expected. The Mali-G57 MC2 GPU, on the other hand, takes care of the phone’s gaming performance. Coming to the software, the phone runs Android 11 with Realme UI 2.0 on top. Unfortunately, it comes with bloatware, but most unnecessary apps can be uninstalled. Realme Narzo 50 doesn’t run Android 12 out-of-the-box, which is also a downside.

Coming to sensors, the phone has an accelerometer, gyro, proximity, compass, and a side-mounted fingerprint sensor. When it comes to cameras, Realme Narzo 50 performs well in proper lighting conditions. However, it struggles in low-lighting conditions, as is often the case with budget mid-range phones. On the rear, the phone features a triple camera setup. It has a 50 MP wide-angle, 2 MP macro, and 2 MP depth sensor camera. LED flash, HDR, and panorama are some camera features.

The device also features a 16 MP wide-angle camera on the front for selfies and video calls. As for video recording, both the front camera and the rear camera setup can record videos in 1080p. In the communication department, the phone has dual-band Wi-Fi, Hotspot, Bluetooth 5.1, GPS, USB Type-C 2.0, and USB On-The-Go. The phone lacks both NFC and Radio, which is pretty surprising. The phone’s battery backup is awesome. If you are an average user, Realme Narzo 50 should last you around one and a half days. The device has a 5000 mAh lithium polymer non-removable battery that supports 33W fast charging. 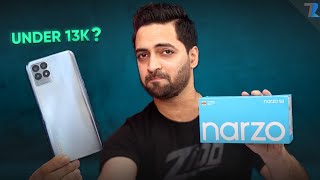 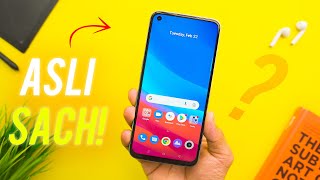