While Realme phones are known to be value for money, Realme Narzo 50A Prime is an exception. The phone’s biggest highlight is its display quality. If the display isn’t at the top of your priority list, it’s better to look elsewhere. Also, you can find similarly priced phones that deliver a better overall package. The phone has a 6.6-inch FHD+ IPS LCD screen with an aspect ratio of 20:9. It has a screen-to-body ratio of 84.4% and an impressive PPI density of 400. Furthermore, the phone can go up to 600 nits of brightness, which should be enough for all lighting conditions.

Realme’s work in the design department here is a mixed bag. The phone isn’t very comfortable to hold due to its sharp edges, and thickness. It weighs 189 grams, which might seem manageable on paper, but it feels heavy. Realme Narzo 50A Prime is 6.47 inches tall, 2.98 inches wide, and 0.32 inches thick. In the sound department, the phone has a loudspeaker and a 3.5 mm headphone jack. Realme has scored a home run in terms of looks, and it looks stunning. At the very least, it doesn’t look like a phone that comes in at a starting price of about €130 (approx. $135).

For colors, the options are limited to Black and Blue. Similarly, the device has two variants. Both variants have 4 GB of RAM but differ in terms of internal storage offered (64 GB and 128 GB). It’s nice to see that the phone has UFS 2.2 memory instead of eMMC which is often used in budget phones. Realme Narzo 50A Prime supports a memory card besides two Nano-SIM cards and connections up to 4G. Performance is an area where the phone pales in comparison to its competitors. It performs well in the case of simple tasks but struggles with intensive ones. The CPU and GPU used here are Unisoc Tiger T612 and Mali-G57.

It would have been better if the phone used Helio or Snapdragon processors here. On the software side, it runs Android 11 out-of-the-box with Realme UI 2.0 on top. Seeing how the phone was released on the 22nd of March 2022, it’s disappointing to see the phone still running on Android 11. The phone’s overall camera performance is average, but the primary camera does a decent job. It has a 50 MP wide-angle, 2 MP macro, and 0.3 MP depth sensor camera on the back. On the front, Realme Narzo 50A Prime has an 8 MP for taking selfies.

All the usual camera features and sensors are present on this phone. Video recording is allowed up to 1080p@30fps and 720p@30fps for the rear camera setup and the front camera respectively. Realme Narzo 50A Prime has a 5000 mAh Li-Po non-removable battery that gets you over the day on average use which should be adequate for most users. It supports 18W fast charging, which is also a plus. For communication, the device supports dual-band Wi-Fi, Hotspot, Bluetooth 5.0, GPS, USB Type-C 2.0, and USB On-The-Go. 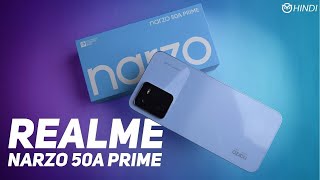 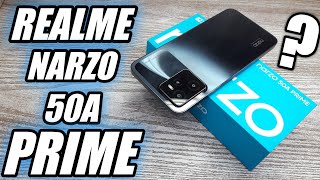