Realme Narzo 50i is the most affordable smartphone from Realme in 2021. The phone was first announced on the 24th of September 2021 and released days later on the 7th of October 2021. The biggest highlight of the phone is that it comes at a starting price of ₹7499, or approximately $100. The phone has two variants. The base variant has 2 GB of RAM and 32 GB of ROM. It would have certainly been better if the base variant had at least 3 GB of RAM. The other variant has 4 GB of RAM with 64 GB of internal storage. It has a triple card slot that supports an SD card and two Nano-SIM cards.

In terms of connections, the phone supports 2G, 3G, and 4G. For color, there are two options once again, which are Carbon Black and Mint Green, and both look great. As far as looks are concerned, the Realme Narzo 50i is great. The build quality of the phone is decent as the phone has a splash-resistant plastic body but lacks Gorilla Glass protection. The phone weighs in at 195 grams, which makes it easy to carry. Similarly, the device measures 6.5 inches in height, 3.01 inches in width, and 0.35 inches in thickness.

The phone has a 6.5-inch HD+ IPS LCD screen that has an aspect ratio of 20:9. Furthermore, the phone has a screen-to-body ratio and a PPI density of 80.8% and 270 respectively. The multimedia experience offered by the Realme Narzo 50i is decent. Also, with a brightness of 400 nits, you shouldn’t face issues when you’re using the phone outdoors. The device runs Android 11 with Realme Go UI on top. The aforementioned UI is a lite version of Realme UI, and the best part about it is the absence of ads and bloatware.

The device uses the Unisoc 9863 processor, so expect it to handle basic tasks like watching videos, calling, and surfing the internet with ease. However, you shouldn’t expect much when it comes to multitasking and more demanding tasks like gaming. The IMG8322 GPU looks after the phone’s gaming performance. The phone has a score of 118733 points in the AnTuTu benchmark test. Suffice it to say, Realme Narzo 50i can only handle the most basic games. For sensors, the smartphone uses an accelerometer, gyro, proximity, and compass.

Evidently, the phone lacks a fingerprint sensor, but on the bright side, it supports the face unlock feature. Coming to cameras, the Realme Narzo 50i has an 8 MP wide-angle camera on the rear. The phone’s camera features include LED flash, HDR, and panorama. For video calls and selfies, the device features a 5 MP wide-angle camera. When it comes to video recording, both phones can do so in 1080p at 30 fps. The pictures taken in ample lighting are serviceable, but the ones taken in low lighting are of poor quality.

In the communication department, the phone has Wi-Fi. Hotspot, GPS, and Bluetooth 4.2 instead of Bluetooth 5.0 or the latest Bluetooth 5.2. Realme Narzo 50i lacks support for NFC, which is expected at this price. The device also has USB On-The-Go and microUSB 2.0. The phone has a 5000 mAh lithium polymer non-removable battery that should easily get you through the day post complete charge. While the device lacks fast charging, it supports reverse charging, which isn’t very commonly found in budget devices. 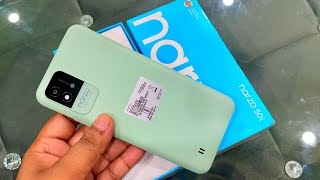 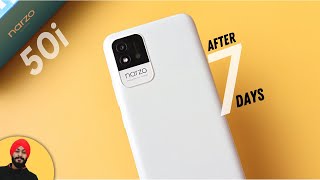