If you are in the market looking for a basic Samsung phone with great battery life, Samsung Galaxy A03 Core deserves your consideration. The phone was first announced on the 15th of November 2021 and released weeks later on the 6th of December. Being an entry-level phone, one of its biggest strengths is affordability. The phone has 2 GB of RAM and 32 GB of internal storage, costs a mere $104 and uses the storage type named eMMC 5.1. However, it doesn’t have any other variant, which is not unusual considering the price.

The device has a dedicated card slot that can accommodate two Nano-SIM cards and an SD card. As for the connections, the phone can handle 2G, 3G, and 4G. For colors, you get to choose between Black and Blue. Samsung Galaxy A03 Core’s build quality is surprisingly good. While the phone has a plastic back and frame, it also has a textured surface on the back. This ensures that you have a solid grip on the phone. Coming to the dimensions, the phone measures 6.46 by 2.99 by 0.36 inches.

The gadget can be operated with one hand, which is something that can rarely be said about modern phones. It weighs 211 grams, which does fall on the heavier side. The phone’s multimedia experience is decent for its price. Samsung Galaxy A03 Core has a 6.5-inch HD+ PLS TFT screen with an aspect ratio of 20:9. The device has a screen-to-body ratio and PPI density of 81.8% and 270 respectively. The Unisoc SC9863A processor handles the overall performance of the phone.

The aforementioned processor isn’t powerful by any means, but the software is optimized well. Therefore, the phone’s performance is reasonably satisfactory. However, it goes without saying that Samsung Galaxy A03 Core is only meant for light tasks. Speaking of software, the phone runs Android 11 (Go edition) with One UI core on top. The phone’s gaming requirements are handled by the IMG8322 GPU. Sensors on this phone include an accelerometer and proximity sensor.

The phone’s camera performance is average, though. On the back, the phone features an 8 MP resolution camera. The gadget has several camera features, including an LED flash. When it comes to video recording, the phone can do so in 1080p@30fps. For selfies and video communications, Samsung Galaxy A03 Core has a 5 MP camera. In the communication department, the phone has Wi-Fi, Wi-Fi Direct, Hotspot, Bluetooth 4.2, and GPS. The device also has microUSB 2.0, and USB On-The-Go but lacks NFC, which is no surprise.

Samsung Galaxy A03 Core shines in the battery department. If you are an average user, the phone should last you around two days. In case you are a light user, the phone could likely have juice for an additional day. On the matter, it should be mentioned that the device has a 5000 mAh lithium-ion non-removable battery, It doesn’t support fast charging and therefore, it takes more than 3 hours to charge from 0 to 100 percent. 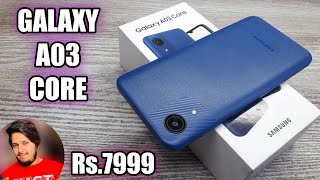 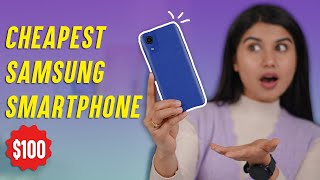