The Samsung Galaxy A03s was announced on the 18th of August 2021 and was released the same day. The phone is priced at $152 for the 3 GB RAM and 32 GB internal storage variant. The other variant has 4 GB of RAM with 64 GB of internal storage and costs $179. For colors, you get to choose between Black, Blue, and White. It’s surely a good choice for Samsung fans but not very creative. However, if you are looking to find out how it performs in various segments, you have come to the right place. Being a budget phone, it is pretty obvious that one of the major advantages of owning this phone is its affordability.

The device has a 6.5-inch PLS LCD screen with a screen-to-body ratio of 81.8% and a screen resolution of 720 × 1600 pixels. The aspect ratio is 20:9 while the PPI density is 270. It’s evident from the specifications that the multimedia experience won’t be great, and it’s hard to say otherwise. However, it does have a loudspeaker and a 3.5 mm headphone jack. The Samsung Galaxy A03s measures 6.46 inches in height, 2.99 inches in width, and 0.36 inches in thickness. While the device feels comfortable in hand, we should mention that it weighs 196 grams, which is definitely on the heavier side.

The device has room for two Nano-SIM cards and supports 2G, 3G, and 4G connectivity. The Samsung Galaxy A03s also has room for an SD card, which is especially helpful if you go for the base variant. On the software side of things, the gadget runs Android 11 with One UI 3.1 core. For those unaware, One UI core is a basic version of One UI, which is mostly used in entry-level devices. The overall performance delivered by the MediaTek MT6765 Helio P35 processor is decent. The gaming performance, on the other hand, is handled by the PowerVR GE8320 GPU. In the AnTuTu benchmark test, the phone scores 106399 points.

The camera performance of this phone is below average, to say the least. The phone has a triple camera setup on the back. It has a 13 MP wide-angle camera, a 2 MP macro camera, and a 2 MP depth sensor camera. On the front, the phone has a 5 MP camera for selfies and video calls. The rear camera has features like LED flash and allows you to record videos in 1080p at 30 fps. What’s really shocking about the Samsung Galaxy A03s is that the front camera doesn’t allow video recording.

The battery performance, in contrast, is a major highlight of this phone. The phone has a 5000 mAh lithium polymer (Li-Po) battery that supports 15W fast charging. For most users, the Samsung Galaxy A03s will easily last a full day on a single charge, if not more. For communication, the phone has USB Type-C 2.0, GPS, Wi-Fi, Wi-Fi Direct, and hotspot. As far as sensors are concerned, the phone has a side-mounted fingerprint scanner, accelerometer, and proximity. 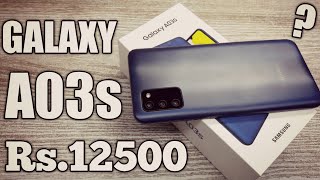 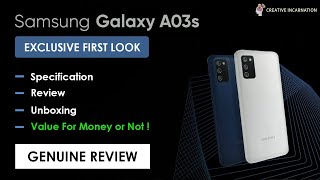