Budget phones usually come with a number of compromises, and Samsung Galaxy A13 5G is no exception. However, it does have its share of advantages too. The phone was first disclosed on the 2nd of December 2021 and released the following day. Being a budget phone, one of its biggest advantages is affordability. The phone comes in a single variant of 4 GB RAM and 64 GB ROM, which is priced at $139. The device supports an SD card, which is nice to see. In addition to an SD card, the Samsung Galaxy A13 5G can accommodate a Nano-SIM card. This can be a disadvantage of owning this phone if you use two SIM cards.

The phone only comes in Black. Therefore, if you are looking for a different color, you will have to seek another phone. On the bright side, it supports 5G, which rarely any budget phones do. The phone’s display quality isn’t good, even by the standards of an affordable phone. It’s worth mentioning here that the device has a plastic back and frame. Coming to dimensions, the device measures 6.48 inches in height, 3.01 inches in width, and 0.35 inches in thickness. It also has an average weight of 195 grams. The phone’s multimedia experience could have been better, too. It has a 6.5-inch HD PLS TFT screen whose aspect ratio is 20:9.

Furthermore, its screen-to-body ratio and PPI density are 81.1% and 270 respectively. On a positive note, Samsung Galaxy A13 5G has a 90 Hz screen refresh rate, which is quite uncommon at this budget. In the sound department, the phone has a loudspeaker and a 3.5 mm headphone jack. Performance is one area where the phone absolutely shines. The MediaTek MT6833 Dimensity 700 5G processor looks after the phone’s overall performance. At this price, it is easily one of the best processors you can get in a phone. The Mali-G57 MC2 GPU controls the smartphone’s gaming requirements.

As for the software, the Samsung Galaxy A13 5G runs Android 11 with One UI on top. The phone will get security updates for four years, which is definitely praiseworthy. When it comes to sensors, it has an accelerometer, gyro, compass, barometer, virtual proximity sensor, and a side-mounted fingerprint sensor. The phone’s primary camera performance is decent in proper lighting conditions. However, it struggles in low lighting conditions, which is expected.

Speaking of cameras, the phone has a triple camera slot on the back. It has a 50 MP wide-angle, 2 MP macro, and 2 MP depth sensor camera. For selfies, the phone has a 5 MP wide-angle camera. The Samsung Galaxy A13 5G has all the usual camera features. Video recording is limited up to 1080p. For communication, the phone has dual-band Wi-Fi, Wi-Fi Direct, Hotspot, Bluetooth 5.0, and GPS. The device not only has USB Type-C 2.0 but NFC as well, which is mostly absent in budget phones.

Its battery backup is pretty amazing too. If you are an average user, the phone should easily last you for more than one and a half days. Even if you are a heavy user, it should get through the day with ease, which is quite impressive. The Samsung Galaxy A13 5G has a 5000 mAh lithium polymer non-removable battery that supports 15W fast charging. What’s not so impressive, or rather disappointing, is that you don’t get a charger in the device’s box. 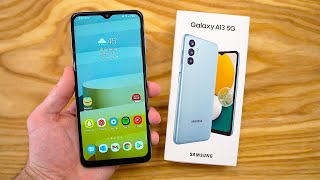 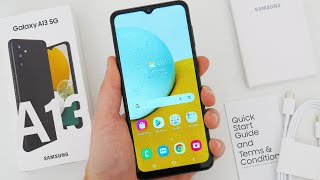