Samsung Galaxy A13 is a handy option for those who are mainly interested in battery life and camera performance. At a starting price of $169, the phone is affordable. However, when you look at the specs, it’s safe to say that it is overpriced. One of the multiple areas where this is evident is the configurations of the phone’s base variant. It has 3 GB of RAM and 32 GB of internal storage, which is unacceptable at this price. The RAM/ROM combinations of the other three variants are 4 GB / 64 GB, 4 GB / 128 GB, and 6 GB / 128 GB. What’s also disappointing is that the phone uses eMMC 5.1 storage instead of UFS.

The device has a dedicated slot that has room for an SD and two Nano-SIM cards. Connections are supported up to 4G. Samsung Galaxy A13 is good-looking and well-built. Therefore, you shouldn’t be concerned with the phone’s resilience to damage. What you should be worried about is that the phone’s glossy finish back panel easily attracts fingerprints. The device has a water drop notch, which might make it feel outdated to some users. It has an average weight of 195 grams and measures 6.5 x 3.01 x 0.35 inches. On the bright side, the phone is protected by Corning Gorilla Glass 5 on the front.

There are different color options to choose from. These are Black, White, Peach, and Blue. The phone’s display quality is decent, but there are rival phones that come with AMOLED screen, and are, therefore, better. Samsung Galaxy A13 has a 6.6-inch FHD+ PLS LCD screen with an aspect ratio of 20:9. The presence of a 60 Hz refresh rate is another downside of owning this phone. Its screen-to-body ratio is 83.2% while its PPI density is an impressive 400. The phone could have been better in the sound department as well. While it does have a headphone jack and a loudspeaker, the phone would have benefitted from stereo speakers.

The biggest downside of owning this phone is undoubtedly its poor performance. Naturally, the gaming performance will only be worse. The chipset and GPU used here are Exynos 850 and Mali-G52 respectively. On the software side of things, the device runs the latest Android 12 with One UI 4.1 on top. You do get bloatware in this phone, but it can be uninstalled. Samsung Galaxy A13 will get two years of major Android operating system updates and four years of security updates, which is among the best in its class. Coming to cameras, the phone’s 50 MP main wide-angle turns in, a good performance.

In addition, the device has a 5 MP ultrawide, 2 MP macro, and 2 MP depth sensor camera on the back. The phone also has an 8 MP wide-angle camera on the front for selfies. The gadget has all the usual camera features like LED flash, panorama, HDR, and can record videos in 1080p@30fps. Its 5000 mAh Li-Po non-removable battery gets you over the day on heavy use. Thus, it’s safe to say that the battery life is awesome. The device supports 15W charging, which is on the smaller side in its segment. Samsung Galaxy A13 has all the usual sensors. For communication, it supports USB Type-C 2.0, USB On-The-Go, NFC, GPS, Bluetooth 5.0, dual-band Wi-Fi, and a hotspot. 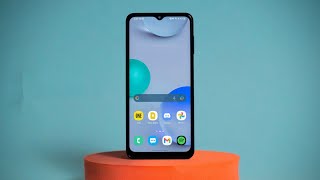 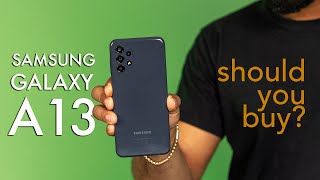