Samsung Galaxy A22 5G has a few things going for it, such as good battery life and 5G connectivity. The smartphone was first announced on the 3rd of June 2021 and released weeks later on the 24th. The phone delivers a good job in most aspects, but you can certainly find better phones at similar prices. Speaking of price, the phone comes at a starting cost of $231 and in four configurations. Two variants have 4 GB of RAM with 64 GB and 128 GB of internal storage. The more premium variants have 128 GB ROM with 6 GB and 8 GB of RAM, respectively.

The phone also comes in four color options, namely, Gray, White, Mint, and Violet. Storage is expandable by an SD card, and the device can support two Nano-SIM cards. As far as connections are concerned, the phone can support 2G, 3G, 4G, and 5G. The build quality of the Samsung Galaxy A22 5G is quite good, even though it has a plastic body. The device weighs in at 203 grams and measures 6.58 by 3.01 by 0.35 inches. The smartphone does feel a bit heavy, but the edges are curved, making it easier to hold.

The multimedia experience offered by the phone is decent, which is supported by the presence of a loudspeaker and 3.5 mm headphone jack. The phone has a 6.6-inch TFT screen with an aspect and screen-to-body ratio of 20:9 and 82.3% respectively. In addition, the device has an impressive PPI (pixels per inch) density of 399. At this price, Samsung could have easily given an AMOLED display. This is one of the major downsides of owning Samsung Galaxy A22 5G. On the software side of things, the phone runs Android 11 with One UI Core 3.1 on top.

For those unaware, the One UI core is a lite version of the standard One UI, and the interface doesn’t feel smooth. This is another major downside of the Samsung Galaxy A22 5G. MediaTek MT6833 Dimensity 700 5G processor handles the overall performance of the phone. On the other hand, the Mali-G57 MC2 GPU looks after your gaming requirements. On the bright side, the device does come with a 90 Hz screen refresh rate. The phone has a score of 201317 points in the AnTuTu benchmark test.

As far as sensors are concerned, the phone has an accelerometer, and gyro, proximity, compass, and a side-mounted fingerprint sensor. Coming to cameras, the phone has a triple camera setup on the back. It has a 48 MP wide-angle, 5 MP ultrawide, and 2 MP depth sensor camera. Camera features include LED flash, panorama, and HDR. On the front, the device features an 8 MP wide-angle camera for selfies and video calls. When it comes to video recording, the rear camera set-up and the selfie camera can do so in 1152p@30fps and 1080p@30fps respectively.

The phone’s overall camera performance is average, but the main camera and selfie camera do perform well in natural lighting conditions. In the communication department, the device has GPS, dual-band Wi-Fi, Bluetooth 5.0, Wi-Fi Direct, and a Hotspot. The device not only has support for NFC but also for FM Radio, which isn’t very common in mid-range phones.

For charging, the Samsung Galaxy A22 5G uses USB Type-C 2.0 port for its 5000 mAh lithium-polymer non-removable battery. The device supports 15W fast charging and at this price, Samsung should have ensured faster charging capabilities. On a positive note, the device will last for more than a day post complete charge, if you are an average user. 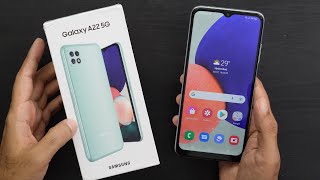 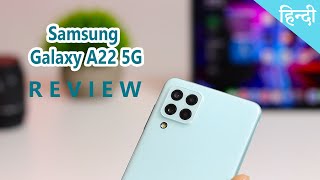