Samsung Galaxy A23 is meant for Samsung fans who are mainly concerned about battery life. However, you can easily get better phones at similar prices. Though battery life isn’t exceptional by any means, it’s still decent. Specifically, the phone should easily get you over the day on average use. The device has a 5000 mAh Li-Po non-removable battery that supports 25W fast charging. Also, the charging speed should have been better. Speaking of prices, the phone comes at a starting price of about €230, which about converts to $252.

Samsung Galaxy A23 has four variants. The base variant has 4 GB of RAM and 64 GB of ROM. The two higher-priced ones have 6 GB of RAM with 64 GB and 128 GB of ROM. The most premium variant has 8 GB of RAM and 128 GB of internal storage. The storage type used here is eMMC 5.1 and not UFS, which is disappointing. The device has a dedicated slot, meaning you can use two Nano-SIM cards and an SD card simultaneously. As for the connections, it supports 2G, 3G, and 4G. The absence of 5G connectivity is certainly a major con of this device. For colors, you get to choose between Black, White, Peach, and Blue.

The phone has a good design, measures 6.48 by 3.03 by 0.33 inches, and weighs 195 grams. While it does have a plastic frame and back, its glass front is protected by Corning Gorilla Glass 5. It has a 6.6-inch FHD+ PLS TFT screen with a refresh rate of 90 Hz. The device has a screen-to-body ratio of 83%, and a PPI density of 400 which is nice to see. At this price, Samsung should have given an AMOLED screen, and this is a huge downside. Samsung Galaxy A23 has a loudspeaker and a 3.5 mm headphone jack but misses out on stereo speakers.

The Qualcomm SM6225 Snapdragon 680 4G delivers a decent overall performance. However, the phone isn’t meant for heavy tasks. The Adreno 610 GPU handles the phone’s gaming requirements. Moving to the software, Samsung Galaxy A23 runs Android 12 with One UI 4.1 on top. As far as sensors are concerned, the phone has an accelerometer, gyro, compass, virtual proximity sensor, and a side-mounted fingerprint sensor. For communication, the phone has dual-band Wi-Fi, Wi-Fi Direct, Hotspot, Bluetooth 5.0, and GPS. The phone has USB Type-C 2.0 but not NFC. This is shocking since most mid-range phones have it.

Coming to cameras, their overall performance is decent, but they struggle in low-lighting conditions. To be fair, that’s often the case with budget and mid-range phones. Samsung Galaxy A23 has a quad-camera setup on the back. More specifically, it boasts a 50 MP wide-angle one with OIS (optical image stabilization), and 5 MP ultrawide, 2 MP macro, and depth sensor ones. The gadget also has an 8 MP wide-angle camera for selfies and video communications. It has all the usual camera features such as LED flash, panorama, and HDR. On the topic of video recording, we should mention the front and the rear camera setup can do so in 1080p and 4K respectively. 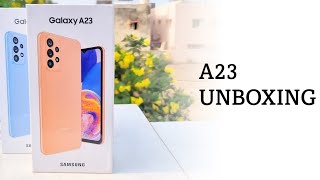 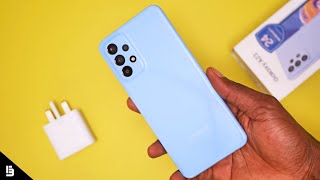