The Samsung Galaxy A32 5G was released on the 22nd of January 2021, and it remains one of the company’s more popular phones. One of the biggest advantages of owning this phone is its competitive pricing. The phone comes in four configurations and at a starting price of $204. The first two variants have 4 GB of RAM with 64 GB and 128 GB of internal storage. Both the premium variants have 128 GB of internal storage, with 6 GB and 8 GB of RAM. If you want more storage, you can use an SD card, as the device has a hybrid SIM tray. Therefore, the device can support up to two Nano-SIM cards with connectivity from 2G to 5G. For color, you can choose between Awesome Black, Awesome White, Awesome Blue, and Awesome Violet.

The fact that it’s affordable and 5G ready does improve the appeal of the device. The phone measures 6.46, 3, and 0.36 inches in height, width, and thickness and weighs 205 grams. While the weight of the device is manageable, you will have issues with how slippery it is. In addition, the Samsung Galaxy A32 5G is a fingerprint magnet. With that being said, it’s better that you use it with a case. The build quality of this phone is quite good as the screen is protected by Corning Gorilla Glass 5. However, the device has a plastic frame, instead of an aluminum one. Coming to the screen quality, the phone has a 6.5 inches TFT screen with an aspect ratio of 20:9.

Furthermore, its screen-to-body ratio and PPI density are 81.6% and 270 respectively. The display is low-resolution without a doubt, but the multimedia experience should still be acceptable. The device has a loudspeaker and a 3.5 mm headphone jack, which contributes to the experience. On the software side of things, the Samsung Galaxy A32 5G runs Android 11 out of the box with One UI 3.1. The UI is smooth, and the phone will also get two major Android OS updates, which is great to hear. MediaTek MT6853 Dimensity 720 5G processor, which is based on the 7 nm fabrication process, delivers a fine overall performance.

Mali-G57 MC3 GPU, on the other hand, handles the phone’s gaming performance. In the AnTuTu benchmark test, the phone scored 226561 points. When it comes to sensors, the phone has an accelerometer, gyro, compass, virtual proximity sensor, and a fingerprint sensor on the side. In the camera department, the Samsung Galaxy A32 5G delivers an impressive performance as well. It has a 48 MP wide-angle, 8 MP ultrawide, 5 MP macro, and a 2 MP depth sensor camera. The phone has all the usual camera features and can record videos in 4K besides 1080p. On the front, the phone features a 13 MP wide-angle camera for selfies.

The phone’s battery backup is very good as it should last you for 1.5 days on average use post full charge. The smartphone has a 5000 mAh lithium-ion non-removable battery that supports 15W fast charging. It would have been better if the Samsung Galaxy A32 5G came with charging capabilities. For charging, the phone has a USB Type-C 2.0 port. In the communication department, the device has USB On-The-Go, GPS, Bluetooth 5.0, Hotspot, Wi-Fi dual-band, and Wi-Fi Direct. The device has NFC and FM Radio as well, which is usually absent in mid-range phones. 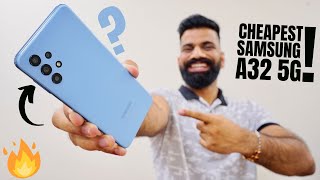 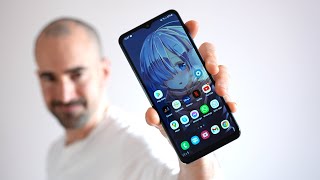