Samsung Galaxy A33 5G’s strength lies in its display, battery life, and affordability. It’s a good option for those that are mainly into watching videos and taking decent-looking pictures. The phone comes at a relatively affordable starting price of €369, which roughly translates to $401. It comes in three storage options. The most economical variant has 6 GB RAM and 128 GB internal storage. The pricier ones have 8 GB RAM with 128 GB and 256 GB ROM. The device can accept an SD card, but it comes at the cost of your second SIM, as it has a Hybrid slot.

For colors, there are four options: Black, White, Blue, and Peach. Out of these, the latter two are the more eye-catching ones. The device has a plastic back and a frame with a glass front. The lack of a glass back might be a con of this device, depending on what you prefer. Samsung Galaxy A33 5G has an IP67 certification for dust and water resistance, unlike many other mid-range phones. It measures 6.29 by 2.91 by 0.32 inches and weighs 186 grams, which does fall on the lighter side. The phone’s display quality is awesome and is one of its best aspects. The phone has a Corning Gorilla Glass 5-protected 6.4-inch FHD+ screen with a refresh rate of 90 Hz.

A couple of criticism here could be the lack of 120 Hz refresh rate and the presence of a teardrop notch which might it feel outdated to some users. The 83.7% screen-to-body ratio and 411 PPI density contribute to a pleasant multimedia experience. While it does have a loudspeaker, it misses out on stereo speakers, which is a major con considering the price. Speaking of downsides, its biggest one is the overall performance. The Exynos 1280 processor delivers a performance that is best described as a tad slow. Mali-G68 is the GPU used here. Out of the box, the phone runs Android 12 with One UI 4.1 on top.

It’s nice to see Samsung Galaxy A33 5G running Android 12 as there are phones that still come with Android 11. Coming to cameras, the phone’s overall performance isn’t the best in the segment, but it’s still decent. The phone has a 48 MP wide-angle camera with OIS, 8 MP ultrawide, 5 MP macro, and 2 MP depth sensor camera on the rear. On the front, the phone features a 13 MP wide-angle camera to take selfies and video calls. When it comes to video recording, the front, and rear camera setup can do so in 1080p and 4K respectively. Samsung Galaxy A33 5G has all the usual features and sensors.

The biggest advantage of owning this phone is undoubtedly its two days battery life on average use. In case you are a heavy user, Samsung Galaxy A33 5G would still get you over a day. The phone has a 5000 mAh Li-Po non-removable battery with support for 25W fast charging. Charging time is surely on the longer side, but the battery life more than compensates for it. Connectivity options include USB Type-C 2.0, USB On-The-Go, GPS, Bluetooth 5.1, dual-band Wi-Fi, Hotspot, GPS, and the very useful NFC. 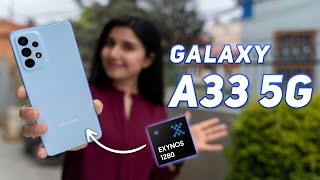 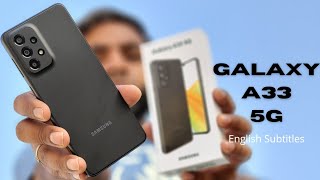