Samsung Galaxy A53 5G was first announced on the 17th of March and released a week later on March 24, 2022. Two of its biggest strengths are its display quality and multimedia experience. The phone has a 6.5-inch FHD+ Super AMOLED Corning Gorilla Glass 5 protected screen with a refresh rate of 120Hz. It has a screen-to-body ratio of 85.4% and an impressive PPI density of 405. The presence of stereo speakers only adds to the experience. However, it misses out on a 3.5 mm headphone jack.

To be fair, most mid-range phones miss out on that, so it’s no surprise. The device measures 6.28 by 2.94 by 0.32 inches and weighs 189 grams. While the device is lightweight, it isn’t easy to use with a single hand. It has an IP67 certification for dust and water resistance, which isn’t very common with mid-range phones. A common strength of most Samsung phones is that they get regular updates. The Samsung Galaxy A53 5G continues with that tradition. Samsung Galaxy A53 5G will get four years of major OS updates and an additional year of security updates. Out of the box, the phone runs Android 12 with One UI 4.1 on top.

The overall performance delivered by the Exynos 1280 CPU is awesome as well. The phone’s gaming requirements are handled by the Mali G68 GPU. In the sensors department, the device has an accelerometer, gyro, compass, virtual proximity sensor, and an under-display fingerprint sensor. Coming to cameras, their performance is decent. It has a 64 MP wide-angle camera with OIS, 12 MP ultrawide, 5 MP macro, and depth sensor camera. Samsung Galaxy A53 5G also has a 32 MP wide-angle camera for selfies. Besides the usual camera features, the phone has gyro-EIS. As for video recording, both the front camera and the rear camera setup can do so up to 4K.

For communication, the phone has dual-band Wi-Fi, Hotspot, Bluetooth 5.1, GPS, USB Type-C 2.0, USB On-The-Go, and NFC. The device’s battery backup is fabulous as well. If you are an average user, Samsung Galaxy A53 5G should last you for more than a day and a half. With more conservative use, it could very well last you for around two days. The phone has a 5000 mAh Li-Po battery that supports 25W fast charging. What’s exciting to learn here is that Samsung claims that the phone has adaptive battery life settings. Therefore, it will become more battery efficient with time, as it learns about your usage.

It comes at a starting price of $386 and in four colors, Black, White, Blue, and Peach. Samsung Galaxy A53 5G has four variants. Three variants have 128 GB of internal storage with 4 GB, 6 GB, and 8 GB of RAM. The most premium variant has 8 GB of RAM and 256 GB of internal storage. The device has a dedicated card slot, which can house an SD card and two Nano-SIM cards. As for the connections, it can support 2G, 3G, 4G, and 5G. 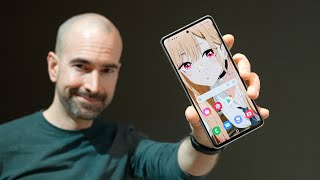 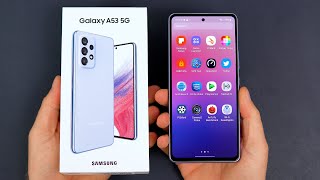