Samsung Galaxy A73 5G isn’t the most value for money option in its segment, but it is a solid phone nonetheless. The phone has several pros including its display, performance, and battery life. It has a few negatives as well, but the positives outnumber them. It was first announced on the 17th of March 2022 and released more than a month later on the 22nd of April. Speaking of price, it comes in at a starting price of about €500 which roughly translates to $541. The phone comes in three RAM+ROM combinations, which are 6 GB+128 GB, 8 GB+128 GB, and 8 GB+256 GB.

The phone supports an SD card, which most high-end phone doesn’t. However, it has a Hybrid slot, which can handle, at most, two Nano-SIM cards. As evident from the name itself, the device can support connections from 2G to 5G. For colors, the options are Gray, Mint, and White. Out of the three, the Mint one stunning. While the phone does have a polycarbonate body, it’s well-built. However, it could be argued that at this price, there should have been a glass back. What can’t be argued is that Samsung has done a great job in ensuring that the device is IP67 certified for dust and water resistance.

The phone is thin and lightweight. For reference, Samsung Galaxy A73 5G weighs 181 grams and measures 6.44 by 3.00 by 0.30 inches. The phone’s display quality is awesome and is one of the best aspects of owning it. It has a 6.7-inch FHD+ Super AMOLED Plus screen protected by Corning Gorilla Glass 5. The addition of a 120 Hz refresh rate is greatly appreciated as it contributes to smoother performance.

While the PPI (pixels per inch) density of 393 isn’t ideal, the screen-to-body is an impressive 87%. In the audio department, the phone has stereo speakers but misses out on a 3.5 mm headphone jack. At this price, you can get phones that perform better. However, it can’t be denied that Qualcomm Snapdragon 778G 5G is a powerful processor and delivers snappy performance. The Adreno 642L GPU delivers a respectable gaming performance as well. Coming to the software, the device runs Android 12 out of the ox which is nice to see, with One UI 4.1 on top.

Bloatware is something that you will get to see on Samsung Galaxy A73 5G, but the unnecessary apps can be uninstalled. A unique advantage of owning most Samsung phones is that it gets regular updates. Samsung Galaxy A73 5G is no different and will get 4 years of major OS updates, which is a huge plus. Its overall camera performance is up to the mark, which is no surprise considering the specifications. It has 108 MP wide-angle, 12 MP ultrawide, 5 MP macro, and 5 MP depth sensor camera on the rear. On the front, it features a 32 MP wide-angle camera.

The phone supports gyro-EIS and OIS, which aren’t very common. Video recording can go up to 4K. Connectivity options include USB Type-C 2.0, USB On-The-Go, NFC, GPS, Bluetooth 5.0, Wi-Fi 6, dual-band Wi-Fi, and Hotspot. As previously mentioned, the battery life is quite good as it lasts around one and a half days on moderate use. The phone has a 5000 mAh Li-Po non-removable battery that supports 25W fast charging. Here it should be mentioned that the competition offers phones that charge a lot quicker. Also, you don’t get a charger in the box of the Samsung Galaxy A73 5G. 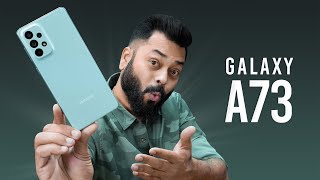 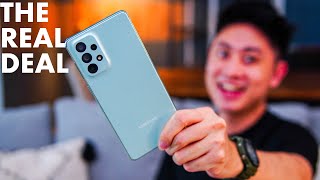