It’s 2018, finally, so yay! Some great updates are on the way from the famous tech companies. Samsung Galaxy A8 (2018) is certainly one of those, and some might call it a Samsung Galaxy S8 mini version. In a few moments, we’ll see if that can be said with ease or not. Before we go into that, we know what you were thinking. You expected Samsung Galaxy S9 reveal right at the beginning of this year, but we’ve gotten this one instead. But don’t fret – it’s not so bad, this is affordable, yet a modern version for all Samsung lovers that aren’t looking to break their bank.

Let’s see if it’s worth picking up this baby because the specs of Samsung Galaxy A8 (2018) are quite similar to the previous flagship, Samsung Galaxy S7. It will be up to you to decide which one is more worth it, but wait until you hear about the camera on this one. It’s the thing that shines brightly when you look at it, and it’s actually on the front! Yes, it’s doing things in reverse, what should’ve been on the back is on the front, allowing for insanely good selfies.

We’re talking dual 16MP + 8MP camera with an effect so, so good. You will be able to achieve the feeling of depth, an effect called bokeh. This means your background will be blurred compared to the object in the front, preferably you. This is an effect most often found on some serious DSLR and SLR cameras like Panasonic Lumix ZS100, for example. Now, of course, this isn’t a camera like that, and you shouldn’t expect 4k quality. Especially with the price range, with the price of Samsung Galaxy A8 (2018) being around $600. A bad thing about these dual cameras is no autofocus support an being able to record only 1080p videos.

Yes, we’ve seen other smartphones being able to achieve higher quality videos, some are Samsung’s own, but this one isn’t a flagship. The camera on the back is 16MP that allows standard features you expect – autofocus, LED flash and a phase detection. There’s no optical image stabilization, but we’ll remind you again – it’s not a top-end mobile phone. Now the Samsung Galaxy A8 (2018) features when it comes to design and screen. The screen-to-body ratio of this beauty is about 75%, which is a bit less than some other smartphones this manufacturer offers. In our opinion, it was just enough, and add absence of a home button to the list and you get a smooth, big surface.

The fingerprint sensor is on the back, which isn’t the best decision in user reviews. Honestly, it might enrage some users again. But, you’ll possibly be pleased to hear there’s no Bixby button on the side, and that’ll boost your morale. The design is a bit thick and a little chunky but doesn’t feel heavy. It’s waterproof and offers a 5.6-inch Super AMOLED screen with 1080 x 2220 pixels resolution. It’s a bit more than full HD, and we’re happy for that. The battery isn’t too big, but fits this screen size and phone peripherals, boasting 3000 mAh Li-Ion of capacity. 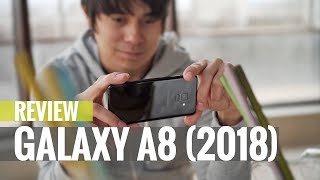 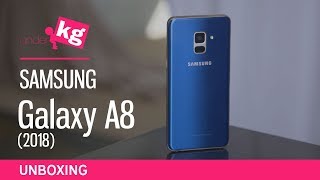