Samsung Galaxy F13 is among the best budget phones from Samsung, at least in recent memory. It isn’t perfect, but it surely delivers a solid value for money. The phone’s biggest highlight is undoubtedly its humongous Li-Po 6000 mAh non-removable battery. As a result, the phone will last you for more than 2 days on average use. At a price of about €150 (about $156), it’s tough to find a phone with better battery life or a bigger battery. The phone also supports 15W fast charging. Another area where the phone knocks it out of the park is future updates.

The phone is expected to get two major Android OS updates and security updates for two years as well. In a segment where most phones receive zero or one Android OS update, it’s refreshing to hear this news. Samsung Galaxy F13 runs Android 12 out of the box with One UI Core 4.1 on top. While it does have bloatware, you can uninstall the unnecessary apps. The performance delivered by the Exynos 850 is decent, all things considered. However, you might have to face delays at times. The GPU used here is Mali-G52. What’s also decent is the phone’s overall camera performance.

Interestingly, the phone’s low-light camera performance is also good, which is a pleasant surprise. The device has a 50 MP wide-angle, 5 MP ultrawide, and 2 MP depth sensor camera on the back. For selfies and video communications, the phone has an 8 MP wide-angle camera. Like most phones in its budget, Samsung Galaxy F13 has camera features like LED flash, panorama, and HDR. Similarly, video recording is supported up to 1080p@30fps. In the communication department, the device has USB Type-C 2.0, USB On-The-Go, GPS, Bluetooth 5.0, and a Hotspot. It’s also among the few phones to feature both NFC and FM Radio.

The phone’s display quality is acceptable, though there are a few criticisms to be made here. These are the absence of a 90 Hz refresh rate and visibility in bright outdoor conditions. On a positive note, it has a 6.6-inch FHD+ PLS LCD screen protected by Corning Gorilla Glass 5. The device’s screen-to-body ratio is 82.5% while the PPI density stands at an impressive 400. As for the audio, Samsung Galaxy F13 has a loudspeaker and a headphone jack. It lacks stereo speakers, but considering the price, that isn’t really a surprise. Samsung has delivered in the design department as well. It has a plastic frame and a textured back panel which keeps scratches and fingerprints at bay.

Samsung Galaxy F13 does feel slightly heavy at 207 grams, but considering the size of the battery, it is understandable. As for the dimensions, it measures 6.51 by 3.03 by 0.37 inches. For colors, the options are Waterfall Blue, Sunrise Copper, and Nightsky Green. Speaking of fingerprints, it has a fingerprint sensor on the side. Other sensors include an accelerometer and compass. The phone has two variants and both variants have 4 GB RAM with 64 GB and 128 GB ROM. It has a triple card slot, which has room for two Nano-SIM cards and an SD card. It can support 2G, 3G, and 4G connections. 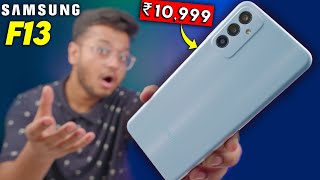 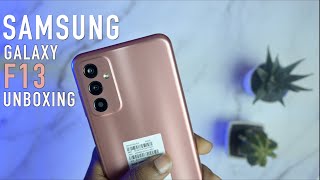