Samsung Galaxy F23 is for fans of the brand who are mainly concerned with battery life and operating system updates. But if you are looking for a balanced phone, you should look elsewhere. Speaking of excellent battery life, the phone should last you around two days on average life. The device has a 5000 mAh Li-Po battery that supports 25W fast charging. While you could argue that Samsung should have ensured fast charging, the bigger issue here is the lack of a power adapter in the device’s box. You do get a USB Type-C to Type-C cable, though. When it comes to OS updates, the phone will get two years alongside four years of security updates.

Samsung Galaxy F23 runs Android 12 out-of-the-box, with One UI 4.1 on top. While it does have bloatware, you can uninstall most unnecessary pre-installed apps. The Qualcomm SM7225 Snapdragon 750G 5G is a powerful processor, but the overall performance is disappointing. This is because you will have to deal with lags and stutters at times. The phone’s gaming requirements are handled by the Adreno 619 GPU. The device’s multimedia experience is okay, but it could have been better. The phone has a 6.6-inch Corning Gorilla Glass 5 protected FHD+ IPS LCD screen with a refresh rate of 120 Hz. Its screen-to-body ratio is 82.3% while its PPI density is 400.

The phone doesn’t get too bright, which might occasionally be a cause for concern. Also, while the phone does have a loudspeaker, it misses out on stereo speakers and a 3.5 mm headphone jack. Coming to sensors, the device has a side-mounted fingerprint sensor, accelerometer, gyro, compass, and a virtual proximity sensor. For communication, the phone has dual-band Wi-Fi, Hotspot, Bluetooth 5.0, GPS, USB Type-C 2.0, and USB On-The-Go. The Samsung Galaxy F23 not only has NFC but FM Radio as well, which is mostly absent in mid-range phones.

As for the cameras, their overall performance is moderate, and they struggle in low-lighting conditions. It has a 50 MP wide-angle, 8 MP ultrawide, and 2 MP macro sensor camera on the back. The phone also has an 8 MP wide-angle camera for selfies and video communications. It has all the usual camera features and can record videos in 1080p@30fps. Another upside of owning this phone is that it’s well-built and sturdy despite having a plastic body. The phone does feel a bit heavy at 198 grams. As for the dimensions, the Samsung Galaxy F23 measures 6.52 by 3.03 by 0.33 inches.

For color, there are two options, namely, Aqua Blue and Forest Green. Similarly, the phone has two variants. Both have 128 GB of internal storage, with 4 GB and 6 GB of RAM. The phone has a dedicated card slot that can accommodate an SD and two Nano-SIM cards. The device can support connections from 2G to 5G. This is certainly an advantage of owning Samsung Galaxy F23. The phone comes at a starting price of about  €190, which approximately converts to $208. 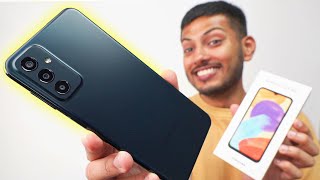 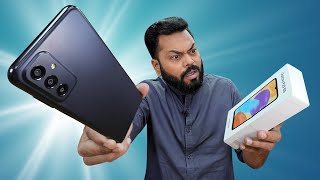