If we were to associate two words with Samsung Galaxy F42 5G, they would be decent and overpriced. That is precisely the story with the phone, it performs decently in most departments, but it’s not going to blow you away in any respect. However, there’s one major flaw that deserves special mention. The phone only supports 15W fast charging, which pales in comparison to what the competition offers. Thankfully, with the phone lasting around 1.5 days, the battery backup makes up for it to an extent. Like most mid-range devices, it has a 5000 mAh Li-Po non-removable battery. Speaking of overpriced, the device comes in at a starting price of ₹20,999 which approximately converts to $270.

Samsung Galaxy F42 5G has two variants and both variants have 128 GB of ROM with the option to choose between 6 GB and 8 GB of RAM. It has a triple card slot which has room for a memory card and two nano-SIM cards. As evident from the name itself, the phone can handle connections up to 5G. Besides battery life, one of the phone’s most significant highlights is its smooth performance. The CPU and GPU used here are MediaTek Dimensity 700 and Mali-G57 MC2. Samsung Galaxy F42 5G can also handle games like Call of Duty Mobile, but not on high settings.

On the software side, the phone runs Android 11 with One UI Core 3.1 on top. The phone has little bloatware, but you can uninstall it. Moving to the design, the phone has a glass front with a plastic frame. The plastic back panel does a good job of resisting fingerprints and smudges. Between Matte Aqua and Matte Black, the former is better at this. Despite weighting 203 grams and dimensions of 6.58 by 3.01 by 0.35 inches, the phone feels comfortable in hand. The phone’s display quality is good, but considering the price, it could have been better.

Samsung Galaxy F42 5G has a 6.6-inch FHD+ TFT LCD screen with a refresh rate of 90 Hz. At a price where manufacturers go for an AMOLED screen, Samsung has opted for a TFT LCD one. This is even more disappointing when you consider that Samsung is historically known for its display quality. On the positive side, the phone has ample brightness, ensuring zero issues while using it outdoors. The device’s screen-to-body ratio and PPI density are 82.1% and 400 respectively. The smartphone has both a loudspeaker and a headphone jack in the sound department. While speaker quality is awesome, stereo speakers would have been a welcome addition.

Like most budget mid-range phones, Samsung Galaxy F42 5G, turns in satisfactory performance in well-lit environments. In low-lighting conditions, the results don’t quite measure up. On the rear, the phone has a 64 MP wide-angle, 5 MP ultrawide, and 2 MP depth sensor camera. For selfies, it’s got an 8 MP wide-angle camera. Coming to sensors and camera features, it has all the usual ones. Interestingly, the rear camera setup can record videos in 1152p@30fps, which is uncommon. The selfie camera, on the other hand, is limited to recording videos in 1080p@30fps. For communication, the device supports dual-band Wi-Fi, Hotspot, Bluetooth 5.0, FM Radio, USB Type-C 2.0, and USB On-The-Go. 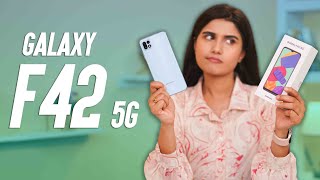 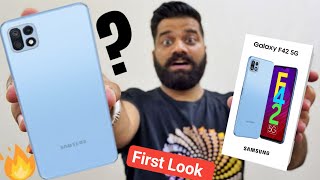