On the 22nd of February 2021, Samsung launched the Samsung Galaxy F62, which is a performance-oriented mid-range smartphone. The performance, as previously mentioned, is amazing and therefore the biggest highlight of this phone. Exynos 9825 processor, which is based on the 7 nm fabrication process, handles the overall performance of the phone. On the other hand, the Mali-G76 MP12 GPU handles the phone’s gaming performance, which is fine. In the AnTuTu benchmark test, the phone scored 425285 points. On the software end, the device runs Android 11 out of the box with One UI 3.1. While the UI is fun to use, it isn’t ad-free.

The build quality of this phone is good, as it feels sturdy in hand despite its plastic frame. The device is 6.45 inches tall, 3 inches wide, and 0.37 inches thick. The device does feel heavy at 218 grams, but it’s considerable since it has a massive battery. Speaking of battery, the phone has a 7000 mAh lithium polymer non-removable battery. The phone supports not just 25W fast charging but reverse charging as well. The device will easily last you for more than two days on average use after a full charge. If battery and performance are your main concerns, then you should strongly consider this phone. However, it would have been better if the Samsung Galaxy F62 had higher charging capabilities.

For charging, the phone uses a USB Type-C 2.0 port. For communication, the phone has USB On-The-Go, Bluetooth 5.0, dual-band Wi-Fi, GPS, and a Hotspot. What’s also nice to see is that the device supports both FM Radio and NFC. Another highlight of the Samsung Galaxy F62 is its display quality. The device has a 6.7 inches Super AMOLED Plus screen, whose aspect ratio is 20:9. The phone’s screen-to-body ratio of 86.7% and a peak brightness of 420 nits ensure you have a good multimedia experience. What also improves this experience is the presence of a loudspeaker and a 3.5 mm headphone jack.

Coming to camera performance, the Samsung Galaxy F62 delivers a mixed experience. While the phone generally delivers a good performance in daylight, its performance in low light could have been better. The phone has a quad-camera setup on the back. It has a 64 MP wide-angle, 12 MP ultrawide, and a 5 MP macro and depth sensor camera. The phone has features like LED flash, panorama, and HDR while video recording can be done in 1080p and 4K. On the front, the phone features a 32 MP wide-angle camera for selfies. Coming to sensors, the phone has a side-mounted fingerprint sensor, accelerometer, gyro, proximity, and compass.

The phone comes at a starting price of ₹23480 that approximately converts to $309. There are two variants of the Samsung Galaxy F62. Both the variants have 128 GB of ROM with 6 GB and 8 GB of RAM. The device has a dedicated SD card slot, so you don’t need to worry about memory. The phone also has room for two Nano-SIM cards that can handle connections from 2G to 4G. The lack of 5G is a downside of owning this device. For color, there are three options, Laser Green, Laser Gray, and Laser Blue. 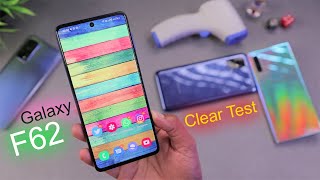 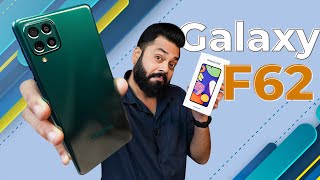