While the Samsung Galaxy M31s was first released on the 6th of August 2020, it’s a great option even today. The price of the phone starts at ₹19,499 which approximately converts to $258. The phone comes in a couple of configurations. The base variant has 6 GB of RAM with 128 GB of internal storage, while the other variant has 8 GB RAM with 128 GB ROM. UFS 2.1 is the storage type used here, and the phone has a dedicated SD card slot for expanding its memory. Besides an SD card, the phone supports two Nano-SIM cards that support 2G to 4G connections. For colors, you get to choose between Black and Blue, which are branded as Mirage Black and Mirage Blue.

The best part about owning this phone is its battery backup. The Samsung Galaxy M31s has a huge 6000 mAh lithium polymer non-removable battery that supports 25W fast charging. The phone also supports reverse charging so that you can charge your friend’s mobile in case you don’t have a charger nearby. The gadget should last for almost two days on average use after a complete charge. For charging, the phone has a USB Type-C 2.0 port. On the flip side, the huge battery contributes to the weight of the device, which is 203 grams. Similarly, the phone measures 6.27 inches in height, 2.93 inches in weight, and 0.37 inches in thickness.

However, the phone’s edges are to make it comfortable to use. Samsung’s phones are known for their amazing display quality, and this phone is no different. The phone has a 6.5 inches Super AMOLED screen that is protected by Corning Gorilla Glass 3. Furthermore, it has an impressive screen-to-body ratio of 86.1% and a PPI density of 405. Consuming video content on the Samsung Galaxy M31s should be pretty good. The phone has both a loudspeaker and a 3.5 mm headphone jack, which is nice to see.

On the software side of things, the device runs Android 10 with One UI 2.5 on top. Samsung’s Exynos 9611 processor, which is based on the 10 nm technology, powers this wonderful device. Mali-G72 MP3 handles your gaming and graphic needs. The performance delivered by the phone is good, and it scores 192550 points in the AnTuTu benchmark test. In the communication department, the gadget has USB On-The-Go, Wi-Fi Direct, GPS, Hotspot, Bluetooth 5.0, and dual-band Wi-Fi. The phone has support for both NFC and FM Radio, a combination that is rarely seen in smartphones across all categories.

As for the sensors, the phone has a side-mounted fingerprint scanner, accelerometer, gyro, compass, and virtual proximity sensor. While the phone’s overall camera performance is decent, the low-light camera performance isn’t. The device has a quad-camera set-up on the back. It has a 64 MP wide-angle and a 12 MP ultrawide angle camera, besides a 5 MP macro and depth sensor camera. Camera features include LED flash, panorama, HDR, and gyro-EIS. As for video recording, the phone can do so in 1080p and 4K. The Samsung Galaxy M31s also has a 32 MP wide-angle for clicking selfies. 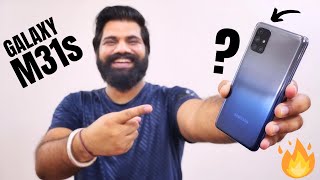 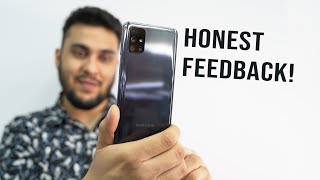