Samsung Galaxy M32 5G is meant for those fans of the brand who are only concerned with 5G connectivity, regular updates, and battery life. For most other departments, you can easily find phones that offer much better value. The phone was first announced on the 25th of August 2021 and released on the 2nd of September. It comes at a starting price of ₹16,999 which translates to $224. When you look at its overall specifications, it’s safe to say that it’s overpriced. The phone has two variants. Both variants have 128 GB of internal storage, with 6 GB and 8 GB of RAM. The RAM and memory type used here is LPDDR3 and eMMC 5.1 respectively.

eMMC storage is acceptable when used in budget phones, but at this price, it’s not. While Samsung Galaxy M32 5G supports an SD card, it only has a Hybrid slot. Therefore, it can support up to two Nano-SIM cards. 5G connectivity, as previously mentioned, is supported on this phone besides 2G, 3G, and 4G. For colors, you get to choose between Slate Black and Sky Blue. The phone’s build quality is satisfactory, and it feels sturdy despite having a plastic back and frame. However, it does feel heavy at 205 grams. Coming to the dimensions, the phone measures 6.46 by 3.00 by 0.36 inches.

It has a 6.5 inches HD+ TFT LCD screen with an aspect ratio of 20:9. It has a screen-to-body ratio of 81.6% and a PPI density of 270. Its display quality is poor, to say the least. The multimedia experience isn’t much better either. The device has a loudspeaker and a 3.5 mm headphone jack, though. The overall performance delivered by the MediaTek MT6853 Dimensity 720 5G is strictly average. The phone’s gaming requirements are handled by the Mali-G57 MC3 GPU. Moving to the software, Samsung Galaxy M32 5G runs Android 11 with One UI 3.1 on top.

As far as updates are concerned, the phone will get major OS Android updates for 2 years and security updates for three years. When it comes to cameras, their overall performance is decent. However, it struggles in low lighting conditions, as is often the case with budget and mid-range phones. The phone has a 48 MP wide-angle, 8 MP ultrawide, 5 MP macro, and depth sensor camera on the back. Samsung Galaxy M32 5G has a 13 MP wide-angle camera on the front to take selfies. Its camera features include LED flash, panorama, and HDR. The rear camera setup can record videos up to 4K.

In the case of the selfie camera, video recording is limited to 1080p. The phone supports dual-band Wi-Fi, Wi-Fi Direct, Hotspot, Bluetooth 5.0, GPS, NFC, USB Type-C 2.0, and USB On-The-Go. The phone’s battery life is superb as it would last for two days on average use. It has a 5000 mAh Li-Ion non-removable battery with support for 15W fast charging. However, you can easily get phones that charge quicker than Samsung Galaxy M32 5G at similar prices. In the sensors department, the phone has a side-mounted fingerprint sensor, accelerometer, gyro, compass, and a virtual proximity sensor. 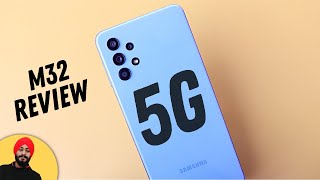 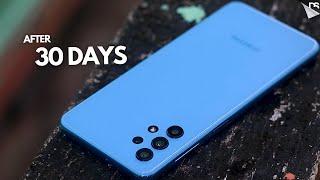