The Samsung Galaxy M32 was launched on the 28th of June 2021, just a week after it was first announced on the 21st of June 2021. The device is powered by the Mediatek Helio G80 processor, which is based on the 12 nm technology. It has an octa-core processor and an AnTuTu benchmark score of 160106 points. Mali-G52 MC2 looks after the gaming performance, which is supported by the 90 Hz refresh rate. However, it’s worth being mentioned here that this isn’t a gaming-centric phone. It’s mainly for people looking to have a great multimedia experience, which it does provide.

Staying on the topic of multimedia experience, the phone comes with an amazing 6.4 inches Super AMOLED screen which is protected by Corning Gorilla Glass 5. The screen-to-boy ratio is 83.9%, while the screen resolution, aspect ratio, and PPI density are 1080 x 2400 pixels, 20:9, and 411 PPI respectively. The Samsung Galaxy M32 can go up to 800 nits of brightness, which ensures that you have a great multimedia experience even when you are outdoors. Coming to the dimensions of the device, it measures 159.3 mm in height, 74 mm in width, and 8.4 mm in thickness. Similarly, the device weighs in at just 180 grams, making it one of the lighter devices.

Coming to cameras, the phone has a quad-camera set-up on the back. It has a 64 MP wide-angle camera, an 8 MP ultrawide camera, a 2 MP macro sensor camera, and a 2 MP depth sensor camera. Some camera features you get on this phone are LED flash, HDR, and panorama. The phone also has a 20 MP wide-angle selfie camera. Both the rear camera set-up and the front camera are capable of recording 1080p videos at 30fps. In the sound department, the Samsung Galaxy M32 has a loudspeaker and a 3.5 mm headphone jack.

Moving on to sensors, the phone has a side-mounted fingerprint sensor, accelerometer, gyro, compass, and a virtual proximity sensor. The Samsung Galaxy M32 has a 5000 mAh non-removable lithium-Ion battery that supports 25W fast charging. Most users would be able to go through a full day with a single charge on this mobile. For connectivity, the phone has dual-band Wi-Fi, Wi-Fi Direct, hotspot, Bluetooth 5.0, and GPS. The device has USB Type-C 2.0, USB On-The-Go, and NFC, which isn’t very common in phones belonging to the budget segment. 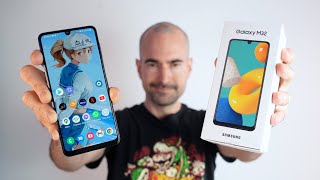 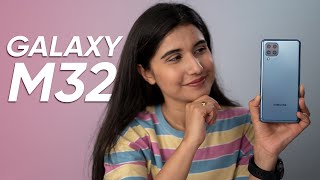