Samsung’s M series is one of those series that caters to several types of mobile users. The lineup not only consists of budget phones but also mid-range ones. Samsung Galaxy M53 is a recent addition to the company’s mid-range list. The device’s greatest strengths are its design and display, which is something Samsung is known for. Starting with the design, the phone has a thickness of 0.29 inches making it among the thinner phones in the segment. At 176 grams, it’s among the lighter phones segment-wise. The height and width of the device are 6.48 and 3.03 inches respectively.

The phone has a matte-finish plastic back that doesn’t easily pick up fingerprints. This is a great thing. Samsung Galaxy M53 comes in Green, Blue, and Brown and has a minimalistic attractive look. Its display quality is awesome, which is no surprise considering Samsung’s history in that regard. The phone has a 6.7-inch FHD+ Super AMOLED Plus screen with a refresh rate of 120 Hz. It also has a screen-to-body ratio of 85.3% and a PPI density of 394. Where the phone loses some points in this segment is the brightness level. The 420 nits of brightness are acceptable for an entry-level phone but at this price, it’s completely unsuitable.

As for the price, its starting price is €419 (approximately $441). It comes in three RAM/ROM combinations, which are 6 GB/128 GB, 8 GB/128 GB, and 8 GB/256 GB. Samsung Galaxy M53 supports a memory card, which is rarely seen in mid-range phones, and for this Samsung deserves praise. In addition, the phone can handle two Nano-SIM cards and the latest 5G technology. The MediaTek Dimensity 900 processor delivers decent overall performance, while the Mali-G68 MC4 GPU also does a similar job. However, there’s no denying that the competition does have better-performing phones. On the software side of things, the device runs Android 12 out-of-the-box with One UI 4.1 on top.

Samsung is known for providing regular updates, and Galaxy M53 is no different. The phone will get two years of major operating system updates and security updates for two additional years. In the audio department, the phone has a loudspeaker but lacks both stereo speakers and a 3.5 mm headphone jack. The absence of stereo speakers is a huge deal since most mid-range phones have them. The phone’s camera delivers a good performance in well-lit environments but doesn’t quite measure up in low-lighting conditions. It has 108 MP wide-angle, 8 MP ultrawide, 2 MP depth, and 2 MP macro sensor camera on the rear.

The device also has a 32 MP wide-angle camera for selfies and video communications. Video recording is allowed up to 4K for both the front camera and the rear camera setup. It has all the usual camera features and sensors. Samsung Galaxy M53 supports dual-band Wi-Fi, Hotspot, Bluetooth 5.2, GPS, USB On-The-Go, and USB Type-C 2.0. It has a 5000 Li-Ion battery that supports 25W fast charging. It lasts around one and a half days on average use, which is satisfactory. The phone’s charging time pales in comparison to what the competition offers, and this is a major con. 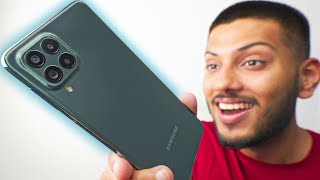 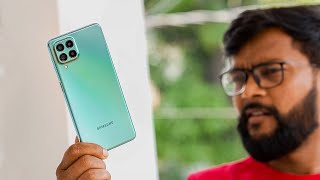