With a starting price of $999, the biggest issue with the Samsung Galaxy S22+ 5G is that it’s highly expensive. Sure, it isn’t meant for someone looking for a phone under $200, but the price is still exorbitant compared to its rivals and the package they offer. Fast charging, One UI, and the in-hand feel are other areas where the phone could have been better. If you can overlook these points, the phone will amaze you in most departments. The phone’s biggest highlight is undoubtedly its overall performance delivered by the Qualcomm SM8450 Snapdragon 8 Gen 1 processor.

The gaming experience delivered by the Adreno 730 GPU is expectedly great, as well. Samsung Galaxy S22+ 5G runs the latest Android 12 with One UI 4.1 on top. Compared to rivals’ user interfaces, One UI is slower and there is scope for improvement on that front. The phone will get four major operating system Android updates, which is nice to hear, too. In terms of design, the device is almost perfect. The reason we say that is that it’s uncomfortable to hold, thanks to the flat edges. It has an armor aluminum frame besides a glass front and back, both of which are protected by Gorilla Glass Victus+.

Additionally, the gadget has IP68 certification for dust/water resistance. It measures 6.20 by 2.98 by 0.30 inches in height, width, and thickness and weighs 195 grams. Samsung Galaxy S22+ 5G has a manageable weight, but it’s certainly big. For colors, the options are Phantom Black, White, Pink Gold, Green, Graphite, Sky Blue, Violet, and Cream. Samsung deserves credit here for giving so many options to choose from. It has an awesome display quality and the multimedia experience is likewise. The phone has a 6.6-inch FHD+ screen with a refresh rate of 120 Hz and support for HDR10+.

The phone’s screen-to-body ratio and PPI density are 88.3% and 393 respectively. Samsung Galaxy S22+ 5G can go up to 1750 nits of brightness, which is massively impressive. Given the price, Samsung could have provided a 1440 × 3088 resolution screen, though. In the sound department, the device has stereo speakers along with high-resolution audio tuned by AKG. The phone’s overall camera performance is superb. Its low-light camera performance and portrait modes deserve special mention. It has a 50 MP wide-angle camera with OIS, 10 MP telephoto camera with OIS and 3x optical zoom, and 12 MP ultrawide camera.

For selfies, the phone has a 10 MP wide-angle camera. Apart from the usual camera features, the phone supports HDR10+ and gyro-EIS. The rear camera set-up and the selfie camera can record videos in 8K and 4K respectively. Similarly, the phone has all the usual sensors. Some of the phone’s unique features are its support for Samsung Pay, Ultra Wideband (UWB), and Samsung DeX. The battery is one department where the phone doesn’t quite measure up to the competition, but it’s decent nonetheless. With moderate use, the device should get you over the day thanks to the 4500 mAh Li-Ion non-removable battery.

One of the major cons of this device is that it only supports 45W fast charging, at a time when competitors are even offering 150W fast charging. For communication, the device supports USB Type-C 3.2, USB On-The-Go, NFC, GPS, Bluetooth 5.2, dual-band Wi-Fi, and a Hotspot. Samsung Galaxy S22+ 5G comes in two ROM/ROM combinations, which are 128 GB / 8 GB and 256 GB / 8 GB. Additionally, the phone can handle two physical Nano-SIM cards along with an e-SIM and connections up to 5G. 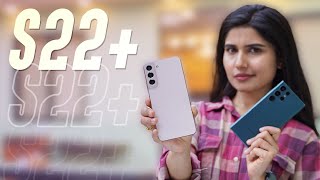 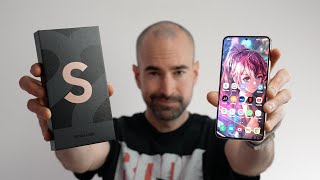