Apart from camera performance, Sony Xperia 10 IV is a solid high-end phone that does well in most departments. Where it shines the most is the battery department. The phone has a 5000 mAh Li-Po non-removable battery that supports 30W fast charging. On one side, the phone lasts for two days on average use, which is superb. On the flip side, the fast charging pales in comparison to what you can get from competing phones. For communication, the device has USB Type-C 2.0, USB On-The-Go, FM Radio, GPS, Bluetooth 5.1, dual-band Wi-Fi, and a Hotspot. It features both NFC and FM Radio, which few phones do. Sony Xperia 10 IV has an almost perfect design.

The reason it isn’t perfect is that the phone doesn’t have a glass back and an aluminum frame. Instead, it features a plastic back and frame. However, the phone is well-built and looks stunning. Since the plastic back has a matte finish, you shouldn’t be worried about it attracting fingerprints. It’s not only a compact phone but also amazingly lightweight. For reference, the phone measures 6.02 by 2.64 by 0.33 inches and weighs 161 grams. Additionally, the device has IP65/IP68 certification for dust/water resistance. In terms of colors, the options are Black, White, Mint, and Lavender. The phone has an awesome display quality, but there’s one small criticism to be made here.

It only has a refresh rate of 60 Hz, while you can get rival phones that come with a refresh rate of 90 or even 120 Hz. Sony Xperia 10 IV has a 6-inch FHD+ OLED screen which is protected by the top-of-the-line Corning Gorilla Glass Victus. The phone’s screen-to-body ratio is 82% while the PPI density stands at a super impressive 457. While you wouldn’t have issues with the phone’s speaker quality, the volume is on the lower end. For a phone that is priced at about €499 (roughly $518), it’s really disappointing to see it miss out on stereo speakers. On the positive side, the phone has high-resolution audio and a segment-rare headphone jack. Performance is decent thanks to the Qualcomm Snapdragon 695 5G chipset.

However, it can’t be denied that you can get phones with many powerful chipsets at this price. Gaming requirements, on the other hand, are managed by the Adreno 619 GPU. Moving to the software end of things, the Sony Xperia 10 IV runs Android 12 out of the box. The software experience is clean, as you would expect from a Sony-branded device. As for the sensors, the device has an accelerometer, proximity, compass, and a side-mounted fingerprint sensor. Finally, the camera performance is simply okay. If your main priority is camera performance, it’s better to look elsewhere.

On the rear, the device has a 12 MP wide-angle camera with OIS, an 8 MP telephoto camera that supports 2x optical zoom, and an 8 MP ultrawide camera. It also has an 8 MP wide-angle camera for selfies and video communications. Sony Xperia 10 IV has all the usual features such as LED Flash, HDR, and panorama, and can record videos up to 1080p@30fps. It comes in a single configuration of 6 GB RAM and 128 GB of internal storage. The memory is expandable, but it comes with a Hybrid SIM slot. Therefore, you either use two Nano-SIM cards or an SD card with a Nano-SIM card. 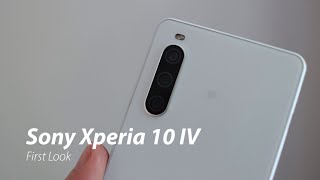 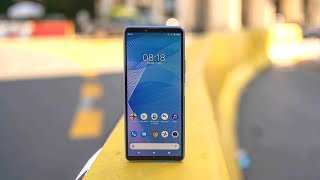