At a starting price of $999, Sony Xperia 5 III isn’t the most value-for-money phone you can get. What it surely is, is a phone that does well in most departments. Selfie camera performance is one of the few areas where the phone fails to make a positive impact. While the 8 MP wide-angle selfie camera turns in average results, the phone’s overall performance is impressive. It has a 12 MP wide-angle, 12 MP telephoto, and 12 MP ultrawide camera on the rear. All three cameras have Dual Pixel PDAF while the first two support OIS.

Its uncommon features include Zeiss optics, Zeiss T* lens coating, eye tracking, and 5-axis gyro-EIS. Video recording is supported up to 4K@120fps while the selfie camera is limited to 1080p@30fps. The phone gets you around 1.5 days of average use, and an additional half-day if you’re a light user. This is awesome but the same cannot be said about its charging time. Sony Xperia 5 III takes around a couple of hours to go from 0 to complete charge, which is incredibly disappointing. This is because you can easily get rival phones that can do the same in less than an hour.

It has a 4500 mAh Li-Po non-removable battery with support for 30W fast charging. The absence of wireless charging is another one of its cons. Performance is super smooth as you would expect from a phone with a Qualcomm Snapdragon 888 5G. Similar is the case with the gaming performance delivered by the Adreno 660 GPU. On the software side, the device runs Android 11 out-of-the-box but is upgradeable to Android 12. Bloatware isn’t just any other issue on this phone, it’s a huge one. The reason being many of the unnecessary pre-installed apps can’t be uninstalled.

Sony devices are known for being compact, lightweight, well-built, and stunning and Sony Xperia 5 III isn’t any different in this respect. It has an aluminum frame with a Corning Gorilla Glass 6 protected glass front and back. Additionally, the device has IP65/IP68 certification for dust/water resistance. The phone weighs 168 grams and measures 6.18 by 2.68 by 0.32 inches. Looking at the specs and its competition, it’s safe to say that the phone is relatively compact. For colors, the options are Black, Green, and Pink. On the side, the phone’s fingerprint sensor is located.

This might make the phone feel outdated for some users, as most competing phones have an in-display fingerprint sensor. Other sensors you get on this phone are an accelerometer, gyro, proximity, barometer, compass, and color spectrum. Sony Xperia 5 III has a great display quality much like the multimedia experience offered by it. It has a 6.1 inches FHD+ OLED screen with a refresh rate of 120 Hz. The phone has a screen-to-body ratio of 81.4% and a PPI density of 449. In the sound department, the device has a headphone jack, stereo speakers, and a dynamic vibration system.

The presence of a headphone jack is a rarity in premium phones. Connectivity options include USB Type-C 3.1, USB On-The-Go, video output, NFC, GPS, Bluetooth 5.2, dual-band WI-Fi, and Hotspot. Continuing on the subject of a rarity in premium phones, it supports an SD card. However, it comes at the cost of using your second Nano-SIM card. Sony Xperia 5 III has two variants and both of them have 8 GB RAM with 128 GB and 256 GB ROM. It comes in at a starting price of $999, and like we previously mentioned, isn’t the best bang for your buck if you’re on a budget. 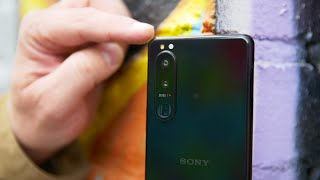 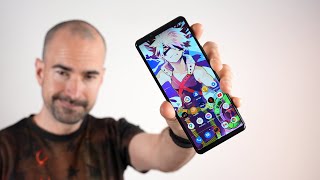