SteelSeries Sensei 310 isn’t the newest addition to the family (take notice of SteelSeries Rival 700) but wasn’t released too far ago either. It’s still very relevant today, although there are some new things announced. This model is a big upgrade when previous Sensei models are taken into consideration. But, important to notice, it doesn’t look anything like them. That’s a good thing, as it’s reminiscent of the Rival series, and there was a SteelSeries Rival 310 released alongside this one. Let’s start with the matte-black color of the mouse itself. It looks amazing, sleek and just modern, a great choice for this and age.

We can say with certainty that the time of glossy, shiny accessories has passed, as all major manufacturers like in Razer Naga Hex V2 and Corsair Glaive RGB case, go for the matte look. SteelSeries Sensei 310 specs are magnificent – it’s ambidextrous, for one. That means both lefties and right-handed people alike can use it with ease. But the size is fitting as well – and fits everybody with average to large sized hands. However, we still advise for you to take a look at it live, so you can try it yourself. The length you read isn’t the best parameter to determine the fit. There are eight buttons total for you to use, and that’s great for this price range.

Of course, you have two buttons, the scroll wheel, and the standard DPI-changer button on top. One major thing about it – it’s not a switch/toggle because SteelSeries Sensei 310 features only two DPI settings. You still have the full ability to go up to 12000 DPI, but in case you’re used to many profiles or have multiple users in the house, it won’t work as well. When you take a look at the side, you might be struck with a feeling of familiarity. If you’ve seen Rival 310, that is – because it’s almost identical, if not the same.

The cable is just a plain one, not braided or protected in any way. However, for the SteelSeries Sensei 310 price of just under $50, we did not expect a lot in that regard. Luckily (or not), the cord is pretty thin, and although it won’t cause the feeling of weight and drag, it might break easily. Also, the Rival 700 we mentioned at the beginning has an option to change cables, as they detach. It might’ve been a good idea here as well, in our opinion, but that’s just us.

Finally, the RGB lighting you wanted to hear about, we’re sure. It’s of a great quality, bright, and just fun and colorful. Like with any gaming mice like Razer DeathAdder Elite, you need to download software on your Windows or Mac. In this case, it’s called SteelSeries Engine 3, and after a short install, you’re presented with a display of all your SteelSeries accessories. The software itself looks amazing, fully black/grey and just beautiful. Everything is easy-to-reach, pretty self-explanatory and even if it isn’t, just mouseover and problem is solved. SteelSeries Sensei 310 brings a great attention to details, that’s for sure. Two lighting zones that are completely independent can be modified to your liking or even combined with a special app called PrismSync. 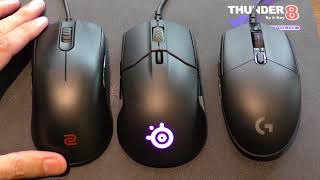 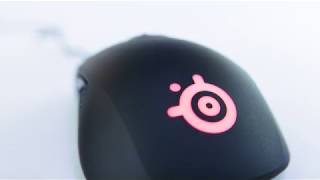