If you’re in the market for a budget mid-range phone, and you don’t mind missing out on 5G, TCL 20S is worth your look. The other con of this device is its slow charging speed thanks to the 18W fast charging. However, the phone’s 5000 mAh Li-Po non-removable battery lasts somewhere between 1 and 1.5 days on average use. Seeing this, it can be said that the battery life makes up for it, to an extent. At the same time, it can’t be denied that the phone’s fast charging speed could have been better. Similar is the case with the device’s camera performance.

It turns in decent overall camera performance, while the results of its night and macro camera modes could have been a lot better. It has a 64 MP wide-angle, 8 MP ultrawide, 2 MP macro, and 2 MP depth sensor camera on the rear. On the front, you’ll find a 16 MP wide-angle camera for selfies and video calls. TCL 20S has all the usual features like LED flash, HDR, and panorama. What’s less usual at this price, is that the phone supports 4K video recording at 30fps. Additionally, the phone can record videos in 30 and 120 fps. Speaking of price, the phone comes in at a starting price of about €210 which approximately converts to $225.

It comes in two RAM/ROM combinations, which are 4 GB / 128 GB and 6 GB / 256 GB. The phone supports both a Nano-SIM card and a memory card. Connections are only supported up to 4G, though. Coming to the design, the phone is not only well-built but also looks good. TCL 20S has a plastic frame with a glass front. The plastic back panel doesn’t just do a good job of resisting fingerprints, it does a great job. It’s also worth mentioning here that the gadget is slightly on the heavier side, and it isn’t easy to operate with a single hand. For reference, the device measures 6.54 by 3.03 by 0.36 inches and weighs 199 grams.

For colors, the options are Milky Way Gray and North Star Blue. The phone’s display quality is its biggest highlight. TCL 20S has a 6.67-inch FHD+ IPS LCD screen with a screen resolution of 20:9. The screen-to-body ratio and the PPI density of the phone are 84% and 395 respectively. While there’s no denying that there are better options out there, the display quality is still fairly decent. In the sound department, the device has a headphone jack and a loudspeaker, but there are no stereo speakers. As long as you are an average user, you won’t be let down by the phone’s performance.

The chipset and GPU used here are Qualcomm Snapdragon 665 and Adreno 610 respectively. On the software side, the smartphone runs Android 11 with TCL UI on top. TCL 20S will get one primary operating system update and security updates for an additional year. This is a plus since there are manufacturers that don’t even promise anything. Connectivity options include USB Type-C 2.0, USB On-The-Go, NFC, GPS, Bluetooth 5.0, dual-band Wi-Fi, and a Hotspot. As for the sensors, the device has an accelerometer, proximity, compass, and a side-mounted fingerprint sensor. 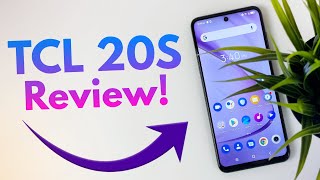 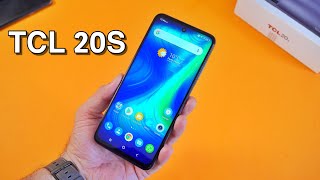