TCL 30+ is made for those die-hard TCL fans who are mainly concerned with the design, display, and battery life. Its pricing and overall performance are way off the mark to appeal to regular folks. At the very least, it won’t appeal to those looking for a value-for-money mid-range smartphone. The phone comes in at a starting price of about €220 (approximately $232), placing it in the mid-range category. It would have made a lot more sense if the phone belonged to the budget segment, though. Another issue here is the use of eMMC 5.1 storage, which is incredibly disappointing.

On the bright side, the phone’s only variant has 128 GB of internal storage, which should be enough for most users. Additionally, it has 4 GB of RAM and supports an SD card. TCL 30+ has room for two Nano-SIM cards, but it doesn’t support 5G connections. This is a huge con since every other similarly priced phone supports it. The phone’s overall performance is poor, as you will have to deal with lags and stutters. There have also been reports of some users facing reboots and app crashes. The chipset and GPU used are MediaTek Helio G37 and PowerVR GE8320 respectively.

Both are immensely weak when compared to the competition. As for the software, TCL 30+ runs Android 12 out of the box with TCL UI 4.0 on top. What’s also poor is the device’s overall camera performance. It has a 50 MP wide-angle, 2 MP macro, and 2 MP depth sensor camera on the rear. Up front, there is a 13 MP ultrawide camera for selfies and video communications. Like most phones in its budget, its camera features include LED flash, HDR, and panorama while video recording is supported up to 1080p@30fps.

Sensors include an accelerometer, proximity, compass, and a side-mounted fingerprint sensor. Coming to the pros, the phone has an all-day battery life, provided you’re an average user. TCL 30+ has a 5010 mAh Li-Po non-removable battery that supports 18W fast charging. For communication, the phone has USB Type-C 2.0, NFC, GPS, Bluetooth 5.0, Wi-Fi, and a Hotspot. TCL has done a good job in the design department as well. It has a glass front with a plastic frame. The back panel has a matte finish, which keeps fingerprints and smudges at bay.

It is not only sturdy but also relatively lightweight when you look at its rivals. To be precise, the phone weighs 184 grams and measures 6.48 by 2.96 by 0.30 inches. TCL 30+comes in two color schemes, namely, Tech Black and Muse Blue. The phone’s display is awesome and is among its biggest pros. It has a 6.7-inch FHD+ AMOLED screen with an aspect ratio of 20:9. While the PPI density of 393 is acceptable, the screen-to-body ratio of 87.6% is impressive. One criticism that needs to be made here, is that the phone has a standard refresh rate of 60 Hz, while most rival phones come with a 90 Hz refresh rate. The gadget hasn’t cut corners in the sound department, since it has high-resolution audio and stereo speakers. 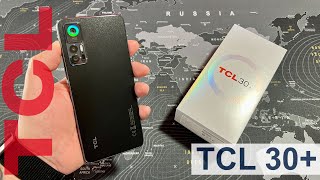 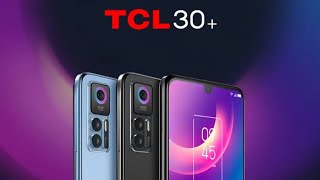