TCL 30 XE 5G isn’t the most value-for-money phone you can get, but it has its share of pros. These include its design, 5G connectivity, and the inclusion of a 90 Hz refresh rate. The phone comes at a price of about €170 which approximately translates to $185. It has 4 GB of RAM and 64 GB of internal storage. It has eMMC 5.1 storage, which is unacceptable at this cost. The phone doesn’t come in a different storage configuration. That isn’t a surprise, though, since there are multiple TCL phones available at similar prices.

The device has a dedicated card slot that can accept a Nano-SIM and an SD card. The phone supports 5G connectivity, which is a major advantage of owning TCL 30 XE 5G. Additionally, the phone supports 2G, 3G, and 4G connections. What’s surely a surprise though is that TCL 30 XE 5G only comes in Shadow Black. As previously mentioned, the phone’s design and display quality are quite good. While it does have a plastic body, it doesn’t feel cheap by any means and is well-built. The device doesn’t pick up fingerprints easily, which is nice to see.

However, it doesn’t have any kind of IP certification. On the front, the glass is protected by Dragontrail Glass. TCL 30 XE 5G has flat sides, which allow you to have a firm grip. It has an average weight of 195 grams and measures 6.46 by 2.95 by 0.35 inches. Considering what is being offered, the display quality is fine, but it’s really poor when you look at the competition. The phone has a 6.52-inch HD+IPS LCD screen with an aspect ratio of 20:9. It has a screen-to-body ratio of 83.5% and a PPI density of 269.

While the inclusion of a 90 Hz refresh rate is appreciated, you can easily get phones that offer AMOLED screens at similar prices. In the sound department, the device has a loudspeaker and a 3.5 mm headphone jack. The MediaTek MT6833 Dimensity 700 5G processor delivers decent performance. However, there’s no denying that you can get better-performing phones at this price. It has a Mali-G57 MC GPU for your gaming requirements. Moving to the software, TCL 30 XE 5G runs Android 11 out-of-the-box with TCL UI on top. Seeing how this phone was released on the 2nd of March 2022, it’s disappointing to see that it still runs Android 11.

Coming to cameras, the phone delivers a good overall performance. The phone has a 13 MP wide-angle camera with PDAF, 2 MP depth, and a 2 MP macro sensor camera on the rear. It also features an 8 MP wide-angle camera on the front for selfies and video communications. Speaking of features, the phone has LED flash, HDR, panorama, and can record videos in 1080p. On the subject of sensors, the device has an accelerometer, proximity, compass, gyro, barometer, and a rear-mounted fingerprint sensor. We should also mention the presence of a fingerprint sensor on the back.

This is a change from being on the side or front and might make it feel outdated to some users. For communication, the phone has dual-band Wi-Fi, Hotspot, Bluetooth 5.1, GPS, USB Type-C 2.0, and USB On-The-Go. TCL 30 XE 5G expectedly lacks NFC. Coming to the battery, the phone has a 4500 mAh Li-Po non-removable battery that supports 18W fast charging. It should get you over the day on average use. Its battery life is acceptable but, once again, you can get competing phones that have better battery life and charge quicker. 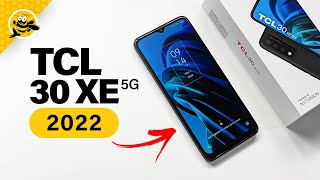 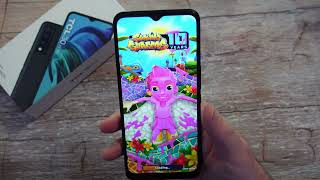