TCL Stylus is a great option in the mid-range segment if your main priorities are software and the overall performance of the phones. It does decently in the design and camera departments as well. However, it is the stylus itself that doesn’t do a good job. It’s average at best. The reason we say this is that in situations where the phone should only pick up the stylus inputs, it picks up accidental touches of your fingers, too. Now, you can be incredibly cautious about not letting your hand touch the screen in such situations, but it will be highly inconvenient.

However, TCL has paid special attention to the software aspect of the phone associated with the stylus. An example of this would be the addition of the ‘Nebo’ note-taking app, which performs exceptionally well. They added this app for free, while it’s actually a paid app. TCL Stylus runs Android 12 out of the box with TCL UI 4.0 on top. While the UI scores top marks for looks, it isn’t going to win any awards for its customizability. Considering the price, the MediaTek Dimensity 700 chipset delivers smooth overall performance. Mali-G57 MC2 is the GPU used here.

The phone has a plastic frame, NEG-protected glass front, and solid build quality. Its plastic back panel does a good job of resisting fingerprints. TCL Stylus measures 6.68 by 3.01 by 0.35 inches and weighs in at 213 grams. It has room for the stylus in the back, so you don’t need to worry about carrying it separately. The gadget also produces a nice click sound when you place it into the back appropriately, This is a nice touch from TCL. On the side, the device has a fingerprint sensor. Other available sensors include accelerometer, gyro, proximity, compass, and barometer.

The phone only comes in Lunar Black and in a single configuration of 4 GB RAM and 128 GB ROM. Similarly, the device can only handle a single Nano-SIM. It supports memory cards, though. The gadget’s display quality is decent, but it could have been better considering the competition. Granted, the competition isn’t offering a stylus at this price, but the phone could have a refresh rate of 90 Hz at the very least. TCL Stylus has a 6.81-inch FHD screen with a refresh rate of 60 Hz. The phone’s screen-to-body ratio and PPI density are 84.9% and 395 respectively.

Still, you will have a good time, consuming content on this phone. Thankfully, TCL hasn’t cut corners in the audio department, as it has stereo speakers as well as a headphone jack. Like most phones, it performs well in ample lighting, but struggles in low lighting. The 50 MP wide-angle camera is certainly the star of the show. On the back, it also has a 5 MP ultrawide, 2 MP macro, and 2 MP depth sensor camera. Selfies are managed by the 13 MP ultrawide camera.

Its camera features include LED flash, HDR, and panorama while video recording is supported up to 1080p@30fps. On the battery side of things, TCL Stylus gets you over the day on average use. Considering the price of about €240 (approximately $250), its battery is best rated as good. Additionally, it supports 18W fast charging, which isn’t among the best in the segment either. For communication, the device supports USB Type-C 2.0, USB On-The-Go, NFC, GPS, Bluetooth 5.2, dual-band Wi-Fi, and a hotspot. 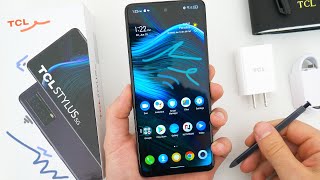 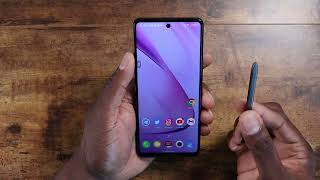