Tecno is one of the newer smartphone brands in the market, and they have done some good work with the Tecno Camon 18 Premier. The phone was released on the 11th of October 2021, while it was first announced on the 4th of October 2021. One of the biggest highlights of this device is its display quality. The phone has a 6.7 inches FHD+ AMOLED screen whose aspect ratio is 20:9. The screen-to-body ratio is 87.2%, while the PPI density is 393. The multimedia experience of this phone is quite good, as you would expect. On the topic of multimedia experience, the presence of loudspeakers and a 3.5 mm headphone jack does contribute to it.

The build quality of this phone is fine, but it could certainly have been better. While the device does have a glass front and back, it lacks an aluminum frame. Instead, the Tecno Camon 18 Premier has a plastic frame. Coming to dimensions, the phone measures 6.45, 2.99, and 0.32 inches in height, width, and thickness. The height of the device does make it uncomfortable to use with one hand. Similarly, the device weighs 200 grams, which falls in the average weight category. The phone comes in just one configuration, which has 8 GB of RAM and 256 GB of internal storage.

The phone has a dedicated SD card slot, which is mostly absent in mid-range devices. The other two card slots are reserved for Nano SIMs that support connectivity from 2G to 4G. The Tecno Camon 18 Premier comes at a starting price of €390 that converts to $441 approximately. For color, you can choose between Polar night and Vast sky. Coming to the software, the device runs Android 11 with HIOS 8.0. The Mediatek Helio G96 processor manages the overall performance of the phone, which is decent. Mali-G57 MC2 GPU handles the gaming performance of the device. The phone has a score of 340845 points on AnTuTu.

The gaming performance is further boosted by the 120 Hz refresh rate. As far as sensors are concerned, the device has a side-mounted fingerprint sensor, accelerometer, gyro, and proximity sensor. For communication, the phone has Wi-Fi, Bluetooth, and GPS. The presence of both FM Radio and NFC is a nice surprise. Furthermore, it has USB Type-C 2.0, and USB On-The-Go. The battery backup of this phone is amazing, to say the least. If you are an average user, it will easily last you for 1.5 days on a full charge. In just 30 minutes, the device can go from 0 to 64% charge. The Tecno Camon 18 Premier has a 4750 mAh lithium polymer non-removable battery that supports 33W fast charging.

The camera performance of the phone is quite good as well. The phone has a triple camera set-up on the back. It has a 64 wide-angle camera, an 8 MP periscope telephoto camera with 5x optical zoom, and a 12 MP ultrawide camera with gimbal OIS. Apart from the usual camera feature of panorama and HDR, it also has Quad-LED flash. On the front, the Tecno Camon 18 Premier houses a 32 MP wide-angle camera for selfies. The selfie camera can record 1080p videos, while the rear camera setup can do so in both 1080p and 4K. 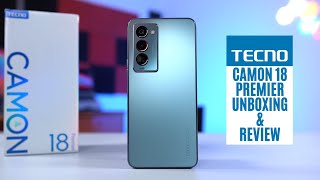 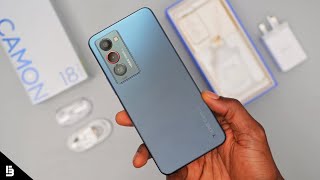