Tecno Camon 18 is an average phone, with its upsides being the camera and battery performance. Coupled with the fierce competition in the budget mid-range segment, things don’t look good for this phone. The first major issue with the device is the pricing, as it comes at a starting price of ₹13,790 or approximately $177. Considering the competition and specs, the phone is overpriced, to say the least. The phone comes in two RAM/ROM combinations, which are 4 GB / 128 GB and 6 GB / 128 GB. While the device doesn’t support an SD card, it is nice to see that the phone has 128 GB of internal storage.

The device can support two Nano-SIM cards and connections up to 4G. While the phone has a plastic back and frame, its build quality isn’t up to the mark. The back panel is glossy, which naturally attracts fingerprints. Therefore, it’s better to use the device with a case on. For colors, you get to choose between Dusk Gray, Ceramic White, and Iris purple, and they all look attractive. The phone has curved edges that allow you to have a firm grip on the phone. Although Tecno Camon 18 has a manageable weight, it is among the thicker phones in the segment. For reference, the device weighs 203 grams and measures 6.65 by 3.02 by 0.35 inches.

It has a 6.8-inch FHD+ IPS LCD screen with a refresh rate of 90 Hz. The phone has a screen-to-body ratio of 84.8% and a PPI density of 395. It can go up to 500 nits of brightness, and you will have no issues using the phone in bright conditions. It should be mentioned here that there’s some backlight bleeding around the selfie camera. On top of that, you can get phones that offer AMOLED screens at this price. All things considered, it’s safe to say that the phone’s display quality is below average. On a positive note, Tecno Camon 18 has a 3.5 mm headphone jack and a loudspeaker.

Performance is another area where the phone disappoints. The MediaTek Helio G88 processor delivers poor performance. You will have to deal with lags if you open multiple heavy apps at the same time. Therefore, the phone is best used for the most basic of tasks. It runs Android 11 out of the box with HIOS 8.0 on top. Tecno Camon 18 has tons of bloatware, which will surely ruin your software experience. For communication, the device has Wi-Fi, Bluetooth, GPS, USB Type-C 2.0, and USB On-The-Go. It not only supports FM Radio but also NFC, which is uncommon for the price point it sells at.

Sensors include a side-mounted fingerprint sensor, accelerometer, gyro, and proximity sensor. Moving to the bright stuff, the phone’s overall camera performance and battery life are decent. On the rear, the phone features a triple camera setup of 48 MP wide-angle, 2 MP macro, and 2 MP depth sensor camera. For selfies, Tecno Camon 18 has a 16 MP wide-angle camera on the front. The device has all the usual features and can record videos in 1080p@30fps. It has a 5000 mAh Li-Po non-removable battery that supports 18W fast charging. If you are an average user, the phone should last you somewhere between a single and 1.5 days. 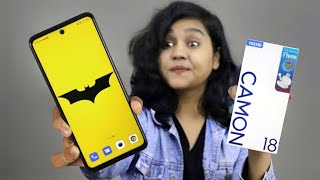 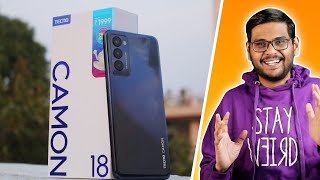