If camera performance and software experience aren’t one of your concerns, then Tecno Pova 5G is worth your consideration. The phone’s highlights include its battery life and overall performance. While the phone only comes in Aether Black, it’s surely among the top phones when it comes to looks. The plastic back panel is a combination of both textured and plain parts. Manchester City Football Club logo and the iridescent panel are certainly the most attractive aspects of the phone’s back. Stunning as it is, it is frankly heavy and not meant to be used with a single hand. For reference, the phone weighs 215 grams and measures 6.80 by 3.08 by 0.36 inches.

Tecno Pova 5G is very well-built, so you don’t need to worry about its build quality. What you should be worried about is the fact that it picks up fingerprints and smudges almost immediately. Therefore, if you do choose to purchase this phone, make sure you use it with a case on. The phone’s display is fairly good, and it would have been even better if the phone had an AMOLED screen. What it does have is a 6.9-inch FHD+ IPS LCD screen. The phone’s screen-to-body ratio and PPI density are 83.7% and 389 respectively. Tecno deserves special praise for the inclusion of the 120 Hz refresh rate feature. The device is at a price where manufacturers mostly include a 90 Hz refresh rate.

In the sound department, the phone has a headphone jack and a loudspeaker but misses out on stereo speakers. On the software side of things, the device runs Android 11 with HIOS 8.0. One of the major cons of this device is that the user interface isn’t the most to easy to deal with, and it comes with bloatware. If you can live with that, MediaTek MT6877 Dimensity 900 delivers chipset smooth overall performance. Gaming on Tecno Pova 5G is decent thanks to the Mali-G68 MC4 GPU. Sensors on this phone include accelerometer proximity and a side-mounted fingerprint sensor. Battery life is a department, where the phone absolutely excels.

If you’re an average user, the phone should get you over two days. Tecno Pova 5G has a massive 6000 mAh Li-Po non-removable battery with support for 18W fast charging. Considering the price of ₹19,999 (approximately $257), the charging speed could have been better. What also could have been better is the phone’s overall camera performance. Tecno Pova 5G has a 50 MP wide-angle, 2 MP, and QVGA camera on the back. The main camera delivers good results, but the other two cameras are better left unused. Selfies are handled by the 16 MP wide-angle camera.

Camera features include Quad-LED flash, panorama, and HDR. Video recording is supported up to 1080p. For communication, the phone supports USB, FM Radio, NFC, GPS, Bluetooth, and Wi-Fi. Pricier phones miss out on FM Radio while budget phones don’t support NFC. It is one of the rare phones that support both. The phone’s only variant has 8 GB of RAM and 128 GB of internal storage. On top of that, Tecno Pova 5G can handle two Nano-SIM cards and an SD card. Connections are supported up to 5G, as evident from the phone’s name itself. 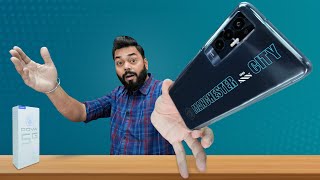 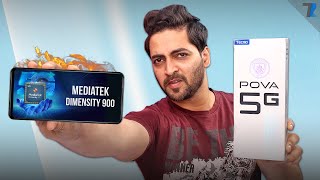