Ulefone has announced the release of the Ulefone Tab A7, a new tablet from the company. Rugged smartphones and smart wearables are what the business is renowned for. Now, though, the business is focusing on the tablet market. Tablet computers are making a comeback. This amazing tablet is anticipated to cost approximately about 130 EUR. The Ulefone Tab A7 is set to hit the market on May 27, 2020. Ulefone’s newest device has a metal unibody design and is available in Space Gray color. A Unisoc SC9863A (28nm) chipset with 64GB of internal storage which supports Octa-core (4×1.6 GHz Cortex-A55 & 4×1.2 GHz Cortex-A55) the device. These upgraded CPUs will enhance your viewing experience while also preventing your tablet from lagging over time. Tablets with heavy metals are widespread, making them difficult to hold; nevertheless, the Ulefone Tab A7 weighs just 566g, making it both portable and advantageous.

Finally, the tablet’s measurements are 243.6 x 162.4 x 7.9 mm. The tablet’s body is made of glass on the front and aluminum on the back, which are kept together by an aluminum frame. The tablet is powered by a Li-Po 7680 mAh battery that enables 10W charging. The battery is non-removable which prevents the battery from wearing out. Wi-Fi 802.11 a/b/g/n/ac, dual-band, hotspot, GPS, Radio, and USB Type-C 2.0 are a few of the external connection options offered by this tablet.

The primary camera has a resolution of 13 megapixels and a video resolution of 1080p at 30fps. The selfie camera has a resolution of 5 megapixels and a great video resolution. It also has GLONASS, and BEIDOU, as well as Hall, G-Sensor, and the ability to turn off the screen using the Hall Sensor. A 3.5mm headphone jack is included with the device. It comes with built-in speakers and high-quality audio. Ulefone Tab A7 provides us with an internal storage of 64GB with 4GB RAM. The additional sensors feature in this tablet are a proximity sensor and an accelerometer.

And, depending on the tablet’s functions and software, it provides a wonderful quality in terms of functionality and battery capacity, which is why the Ulefone Tab A7 is a great investment! 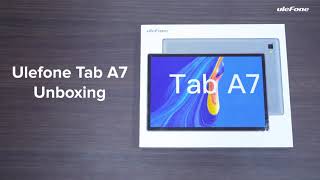 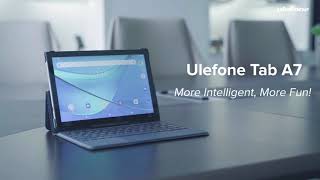