Fast charging is the biggest highlight of Vivo T1 44W, which isn’t a surprise for obvious reasons. The phone supports 44W fast charging, which the name gives away. If the ads are to be believed, the phone can go from 1 to 50% in 28 minutes. It is easily among the best phones in the budget mid-range segment on the subject of fast charging. Capacity-wise, the phone keeps up with the competition, as it has a 5000 mAh Li-Po non-removable battery. Results are a bit different when it comes to battery life, as the phone only manages to get you over the day on average use.

It has an awesome display quality, but there is a slight criticism to be made here. The criticism is the absence of a 90 Hz refresh rate, which many rival phones offer. At the same time, it can’t be denied that phones with AMOLED screens aren’t a guarantee at this price either. Vivo T1 44W has a 6.44-inch FHD+ screen with an aspect ratio of 20:9. Its screen-to-body ratio and PPI density are 84.4% and 409 respectively. Similar is the story in the sound department, where the phone misses out on stereo speakers. To make matters worse, the quality of the mono speaker is simply average. On the bright side of things, you can use your wired earphones as it has a headphone jack.

Also, it has high-resolution audio. The phone’s overall performance is decent thanks to the Qualcomm Snapdragon 680 4G chipset. For your gaming needs, the phone has an Adreno 610 GPU. As for the software, the device runs Android 12 out-of-the-box with Funtouch 12 on top. Vivo T1 44W comes with tons of bloatware, which certainly ruins the experience. When it comes to the cameras, the phone delivers average overall results. The 16 MP wide-angle selfie camera is capable of turning in, a decent performance, though. On the rear, the device has a 50 MP wide-angle, 2 MP macro, and 2 MP depth sensor camera.

Like most phones in its segment, it can record videos in 1080p@30fps, and its low-light camera performance could have been better. Its camera features include LED flash, HDR, panorama, and gyro-EIS. Connectivity options include USB Type-C 2.0, USB On-The-Go, GPS, FM Radio, Bluetooth 5.0, dual-band Wi-Fi, and Hotspot. Vivo has a reputation for producing well-designed phones, and Vivo T1 44W is merely another example. It has a glass front with a plastic back and frame. The back panel has a matte finish which does a good job of resisting fingerprints and smudges. It weighs 182 grams and measures 6.33 by 2.91 by 0.33 inches.

Looking at the specs, it’s safe to say that Vivo T1 44W is slim and lightweight. For colors, the options are Midnight Galaxy, Starry Sky, and Ice Dawn. Moving to the sensors department, the phone has an under-display fingerprint sensor, accelerometer, gyro, proximity, and compass. The device comes in at a starting price of about €190 (about $200). It has three variants, all of which have 128 GB ROM but differ in terms of RAM provided (4 GB / 6 GB / 8 GB). You can increase the phone’s memory further through an SD card. The phone can support two Nano-SIM cards and connections up to 4G. 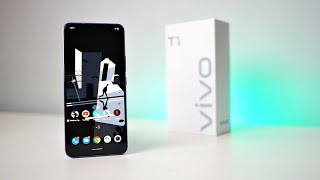 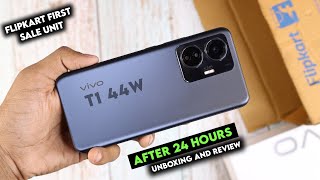