Vivo T1 5G is the first phone in T1’s lineup, which is why it’s an interesting release. The phone was first announced on the 9th of February 2022 and released on the 14th. The device has three variants and comes in Starlight Black and Rainbow Fantasy colors. All three variants have 128 GB of internal storage but differ in RAM: 4 GB, 6 GB, and 8 GB. The phone comes at a starting price of about €180 which translates to about $204. It would have certainly been better if the premium variant had at least 256 GB of internal storage.

The phone’s memory can be extended via an SD card, but it only has a Hybrid card slot. Therefore, the phone can support up to two Nano-SIM cards and connections from 2G to 5G. The presence of 5G support is a major upside of this phone. The Vivo T1 5G feels pretty light at 187 grams and measures 6.46 by 2.98 by 0.33 inches. The phone’s build quality is pretty great despite its plastic body. The device has a 6.58-inch FHD+ IPS LCD screen with an aspect ratio of 20:9.

Its screen-to-body ratio of 83.9% is less than ideal, but its PPI (pixels per inch) density of 401 is impressive. The phone’s multimedia experience is fine but could be better. What truly limits the experience is the speaker’s audio output. On the subject, it should be mentioned that the phone has a loudspeaker and a 3.5 mm headphone jack. On the software end, Vivo T1 5G runs Android 12 with Funtouch 12 on top. It is nice to see the phone running Android 12, as there are phones that still come with Android 11.

The UI is fun to use, but the device isn’t free from bloatware. On the positive side, most unnecessary pre-installed apps can be uninstalled. The Qualcomm SM6375 Snapdragon 695 5G delivers capable overall performance. However, there’s no denying that you can find better-performing phones at similar prices. The Adreno 619 GPU handles the phone’s gaming performance and the 120 Hz screen refresh rate certainly helps. In the AnTuTu benchmark test, the phone has a score of more than 400,000 points.

As for the sensors, the phone has a side-mounted fingerprint sensor, accelerometer, proximity, and compass. In the communication department, the phone has dual-band Wi-Fi, Wi-Fi Direct, hotspot, Bluetooth 5.1, GPS, USB Type-C, and USB On-The-Go. The device has FM Radio but lacks support for NFC, which is expected from a mid-range phone.

In terms of battery backup, the Vivo T1 5G performs brilliantly. Once completely charged, the phone should get you through one and a half days of average use. It has a 5000 mAh lithium polymer non-removable battery that supports 18W fast charging. While it would have been better if the phone supported 33W fast charging, its battery backup more than compensates for it.

Coming to the cameras, the overall performance is decent, but the lack of ultrawide and telephoto is felt. On the back, the phone has a 50 MP wide-angle, 2 MP macro, and 2 MP depth sensor camera. The phone’s camera features include Dual-LED flash, HDR, and panorama. Vivo T1 5G features a 16 MP wide-angle camera for selfies and video calls. As for video recording, both the front camera and the rear camera setup can record videos in 1080p at 30fps. 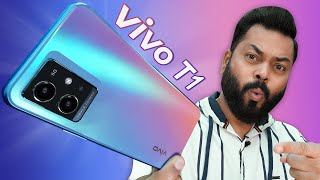 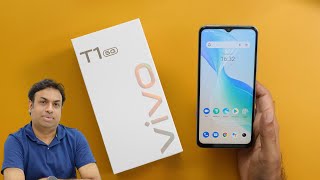