Vivo T1 Pro is an amazing all-around mid-range phone that does well in most departments. At a starting price of about €300 (roughly $315), the phone delivers some serious value for money. The only area where it could have been better is the battery life. However, it would still get you over the day if you are an average user. Capacity-wise, it’s also slightly on the smaller side, as it has a 4700 mAh Li-Po non-removable battery. While the battery life hasn’t impressed us, the case is exactly the opposite on the fast charging side. This is because the phone supports 66W fast charging.

As a result, the phone can go from 1 to 50% of charge in just 18 minutes, which is easily among the best in the segment. Vivo T1 Pro comes in Turbo Black and Turbo Cyan and has a matte finish plastic back panel. As you might expect, the phone does a good job of keeping fingerprints at bay. The frame is also made of plastic. It is easy to handle thanks to its curved edges, compact size, and lightweight. To be exact, the device weighs 180.3 grams and measures 6.29 by 2.90 by 0.33 inches. The phone has an under-display fingerprint sensor in addition to an accelerometer, gyro, proximity, and compass sensor.

Its display quality is awesome and the same goes for its multimedia experience. It has a 6.44-inch FHD+ AMOLED screen with a 90 Hz refresh rate. Both the screen-to-body ratio of 85.1% and PPI density of 409 are impressive. Vivo T1 Pro can go up to 1300 nits of brightness, beating some premium phones as well. On the subject of audio, the phone has high-resolution audio and stereo speakers but misses out on a headphone jack. The Qualcomm Snapdragon 778G chipset delivers super-smooth performance. This is expected since the aforementioned chipset is among the very best in the segment.

Gaming requirements are handled by the Adreno 642L GPU. On the software end, the device runs the latest Android 12 out-of-the-box with Funtouch 12 on top. Vivo T1 Pro has bloatware, although it can be uninstalled. If the camera performance is the first thing you consider before buying a phone, then this phone is seriously worth your consideration. The overall camera performance is outstanding, which is often the case with Vivo branded phones. It has a 64 MP wide-angle, 8 MP ultrawide, and 2 MP macro sensor camera on the rear.

It also has a 16 MP wide-angle camera for selfies and video communications. The phone’s uncommon camera and video features include Dual-LED dual-tone flash and gyro-EIS. Video recording is supported up to 1080p@30fps. In the communication department, the phone has USB Type-C 2.0, USB On-The-Go, GPS, Bluetooth 5.2, dual-band Wi-Fi, and a Hotspot. Vivo T1 Pro misses out on NFC, which is shocking considering the price. The phone has two variants and both variants have 128 GB of ROM but differ in terms of RAM (6 GB / 8 GB). It doesn’t support an SD card, but it can support up to two Nano-SIM cards and connections up to 5G. 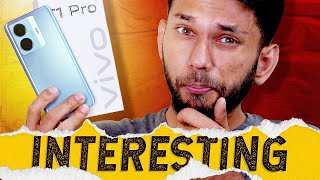 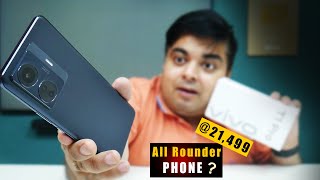