Vivo V23 Pro is a value-for-money phone that has an awesome display quality and delivers likewise performance. What truly sets it apart from the other phones in its segment, is its superb design. It has a Schott Xensation α protected glass front, a plastic frame, and a glass back. It comes in two color schemes-Sunshine Gold and Stardust Black. In case you go for the former variant, the color of the back panel changes from Gold to a combination of Blue and Green when exposed to sunlight. Both variants have a matte finish back panel that does a great job of keeping fingerprints at bay. Not only that, but the phone is also slim, lightweight, and comfortable to hold.

To be precise, the phone weighs 171 grams and measures 6.28 by 2.89 by 0.29 inches. As previously mentioned, the device has an awesome display quality. It has a 6.56-inch FHD+ AMOLED screen with a refresh rate of 90 Hz. While the phone has a good PPI density of 398, the screen-to-body ratio of 89.5% is impressive. Furthermore, the gadget can not only go up to 1300 nits of brightness but also has support for HDR10+. Where it falls behind the competition is in the sound department. Vivo V23 Pro lacks stereo speakers, which is an enormous con considering its starting price of ₹34,999 (approximately $447).

This certainly hurts the multimedia experience of the phone. Expectedly, it lacks a headphone jack. Just like its display quality, the phone’s overall performance and gaming performance will please you. The chipset and GPU used are MediaTek Dimensity 1200 and Mali-G77 MC9. On the software side of things, Vivo V23 Pro runs Android 12 out-of-the-box with Funtouch 12 on top. Coming to the cameras, its overall performance is average, but given the right lighting conditions, the main selfie camera will leave you pleasantly surprised.

It has a 108 MP wide-angle, 8 MP ultrawide, and 2 MP macro sensor camera on the back. Up front, you’ll find a 50 MP wide-angle and 8 MP ultrawide camera. Both the rear and the front camera setup can record videos up to 4K@30fps. Camera features include Dual-LED dual-tone flash, HDR, and panorama. In the sensors department, Vivo V23 Pro has an under-display fingerprint sensor, accelerometer, gyro, proximity, and compass. When it comes to the phone’s battery performance, it will get you over the day on average use, but not beyond that. Needless to say, you can easily get similar-priced phones that deliver a much better battery life.

The phone has a 4300 mAh non-removable battery, which falls on the shorter side considering its rivals. Where our opinion is certainly more positive, is regarding the phone’s charging speed. The device supports 44W fast charging and as per the ads, the device can go from 1% to 63% of charge in 30 minutes. Connectivity options include USB Type-C, USB On-The-Go, GPS, Bluetooth 5.2, dual-band Wi-Fi, and Hotspot. Vivo V23 Pro misses out on NFC, which barely any other competing phone does. It comes in two RAM/ROM combinations, which are 8 GB/128 GB and 12 GB/256 GB. While the device doesn’t support an SD card, it can handle two Nano-SIM cards and connections up to 5G. 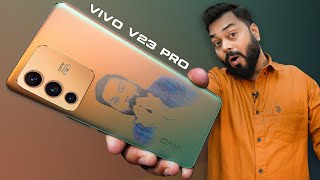 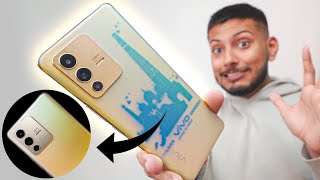