The Vivo X70 Pro was launched on the 17th of September 2021, eight days after it was first announced on the 9th of September 2021. The device is powered by the MediaTek MT6893 Dimensity 1200 5G processor, based on the 6 nm technology, which is one of the most powerful processors out there in the market. It has an octa-core processor and its AnTuTu benchmark score is 684277. Mali-G77 MC9 GPU looks after the gaming and graphic requirements of this phone. The device supports two Nano-SIM cards and connectivity from 2G to 5G. However, you won’t be seeing an SD card slot on this phone. But considering the storage it comes with, it shouldn’t be a problem.

Coming to the phone’s dimensions, it measures 6.23 inches in height, 2.88 inches in width, and 0.31 inches in thickness. Similarly, the device weighs 186 grams. The Vivo X70 Pro has a 6.56 inches AMOLED screen with a screen resolution of 1080 x 2376 pixels and a screen-to-body ratio of 90.3%. Not only that, but the phone can also go up to 1300 nits of brightness. Similarly, the PPI density is 398. Going by the specs, you should have no problem using the phone outdoors and have a great multimedia experience as well.

When it comes to the camera department, the phone has a quad-camera set up on the back. It has a 50 MP wide-angle camera, an 8 MP periscope telephoto sensor that allows 5x optical zoom, a 12 MP ultrawide camera that allows 2x optical zoom, and a 12 MP ultrawide camera. The camera features include Zeiss optics, Zeiss T* lens coating, Pixel Shift, dual-LED dual-tone flash, HDR, and panorama. On the front, the Vivo X70 Pro has a 32 MP wide camera. You can record 4K and 1080p videos with both the rear camera set-up and the front camera. The phone should deliver an amazing camera performance as well.

The phone has a loudspeaker but lacks a 3.5 mm headphone jack, which is often the case with premium phones. For communication, the device has dual-band Wi-Fi, Wi-Fi Direct, hotspot, Bluetooth 5.2, and GPS. While you won’t be able to listen to FM radio on this phone, it does have NFC and Infrared port, which is nice to see. Sensors include an under-display Fingerprint scanner, accelerometer, gyro, proximity, compass, and color spectrum. Coming to matters of battery and charging, the Vivo X70 Pro has a 4450 mAh lithium polymer non-removable battery. The phone supports reverse charging and 44W fast charging. Besides, the device has USB Type-C 2.0, and USB On-The-Go. 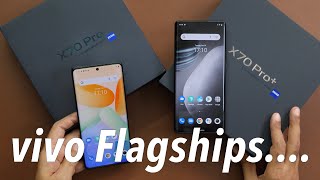 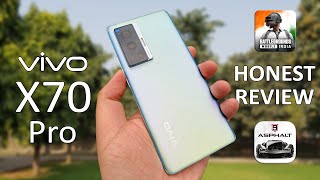