Vivo Y33s isn’t a smartphone that is going to top any value-for-money lists. What it will surely be known for is its battery life and design. Speaking of battery life, the phone gets you around 2 days on average use, which is excellent. It has a 5000 mAh Li-Po non-removable battery with support for 18W fast charging. Considering the price, the fast charging speed is decent, although not quite the fastest in the segment. In addition, the device supports reverse charging. The gadget has a great design, and it certainly looks like it’s worth more.

Like most phones of its segment, it has a glass front with a plastic back and frame. Now, it’s worth mentioning here that the phone does pick up scratches. Therefore, it’s recommended to use the phone with a case on. Concerning the competition, Vivo Y33s is relatively lightweight at 182 grams. As for the dimensions, it measures 6.47 by 3.00 by 0.31 inches. It comes in two color schemes — Mirror Black and Midday Dream. The phone has a fingerprint sensor on the side while other sensors include an accelerometer, gyro, proximity, and compass.

On paper, the device looks underpowered thanks to the MediaTek Helio G80 chipset. In reality, however, you will have no issues as long as you’re limited to the day-to-day tasks like calling, using social media apps, texting, and watching videos. Even the gaming performance delivered by the Mali-G52 MC2 GPU is acceptable. On the software end, the device runs Android 11 out-of-the-box with Funtouch 11.1 on top. Vivo Y33s gives you tons of ads, which is one of its major issues. Moving to the cameras, the phone’s overall performance is good in ample lighting conditions. Results aren’t favorable in low lighting conditions, though.

The gadget has a 50 MP wide-angle, 2 MP macro, and 2 MP depth sensor camera on the back. It also has a 16 MP wide-angle camera for selfies and video communications. The phone can record videos in 1080p@30fps, while its camera features include an LED flash. Its display quality is okay but for the same price, you can get a phone with an AMOLED screen. The other issue here is the absence of a 90 Hz refresh rate. Instead, Vivo Y33s has a 6.58-inch FHD+ IPS LCD screen with a standard 60 Hz refresh rate and an aspect ratio of 20:9.

The phone’s screen-to-body ratio and PPI density are 83.4% and 401 respectively. In the sound department, the device has a loudspeaker and a headphone. The absence of stereo speakers is another con of owning the Vivo Y33s device. Connectivity options include USB Type-C 2.0, USB On-The-Go, NFC, FM Radio, GPS, Bluetooth 5.0, dual-band Wi-Fi, and Hotspot. It comes in at a starting price of ₹18,500 (roughly $236) and in three RAM/ROM combinations. These are 4 GB/64 GB, 4 GB/128 GB, and 8 GB/128 GB. It allows you to extend the phone’s RAM virtually by up to 4 GB. Memory is also expandable using an SD card. Besides an SD card, it supports two Nano-SIM cards and connections up to 4G. 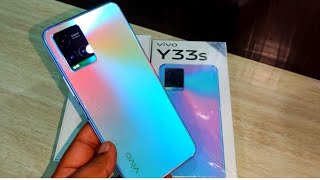 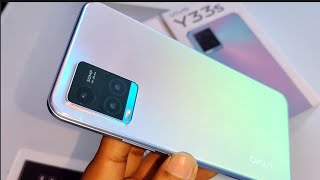