Xiaomi launched the Xiaomi 11T on the 5th of October 2021, after being announced on the 15th of September 2021. The device is powered by the MediaTek MT6893 Dimensity 1200 5G processor, which is based on the 6 nm technology. It has an octa-core processor and its AnTuTu benchmark score is 642833. Mali-G77 MC9 GPU looks after the gaming and graphic requirements of the phone. Your gaming experience is further supported by the 120 Hz refresh rate. The phone runs Android 11 out-of-the-box, with the Android skin being MIUI 12.5. The device supports two Nano-SIM cards and connectivity from 2G to 5G. The phone comes in two variants, 8 GB of RAM with 128 GB of internal storage, and 8 GB of RAM with 256 GB of internal storage. The RAM and memory type is LPDDR4X RAM and UFS 3.1 respectively.

The price for Xiaomi 11T starts at € 599.90, which translates to $692. For color, you’ll get three options, Gray, White, and Blue which Xiaomi has termed, Meteorite Gray, Moonlight White, and Celestial Blue. Coming to the phone’s dimensions, it measures 6.46 inches in height, 3.03 inches in width, and 0.35 inches in thickness. The Xiaomi 11T weighs 203 grams and has an IP53 rating for dust and splash protection. When it comes to the build quality, the device has an aluminum frame with a glass back, and a glass front that is protected by the top-of-the-line Corning Gorilla Glass Victus.

The Xiaomi 11T has a 6.67 inches AMOLED display with a screen resolution of 1080 x 2400 pixels, and an aspect ratio of 20:9. The screen-to-body ratio is 85.1% and the phone can go up to 1000 nits of brightness. The PPI density is 395. Looking at the specs, you should have a great multimedia experience and encounter no issue while using the phone outdoors. Coming to cameras, the phone has a triple camera set-up on the back. It has a 108 MP wide camera, an 8 MP ultrawide camera, and a 5 MP telephoto macro camera. The back camera setup records videos at 1080p and 4K while the camera and video features include, gyro-EIS, HDR, panorama, and Dual-LED dual-tone flash. The phone also has a 16 MP wide-sensor selfie camera that records videos at 1080p. On paper, the phone should deliver a great camera performance.

The phone has stereo speakers but lacks a 3.5 mm headphone jack. Coming to the topic of communication, the device has dual-band Wi-Fi, Wi-Fi Direct, Hotspot. The Xiaomi 11T pro has GPS, NFC, and an infrared port as well. While you won’t be able to listen to FM Radio on this phone, it does have support for Dolby Atmos. Coming to battery and charging, the smartphone has a 5000 mAh lithium-polymer non-removable battery. The gadget supports 67W fast charging, and the device can go from 0 to 100 in just 36 minutes. Besides, the device has USB Type-C 2.0, and USB On-The-Go. As far as sensors are concerned, the phone has a side-mounted Fingerprint sensor, accelerometer, gyro, proximity, and compass. 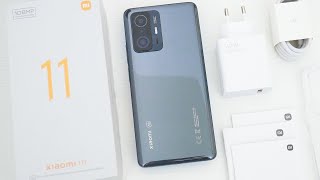 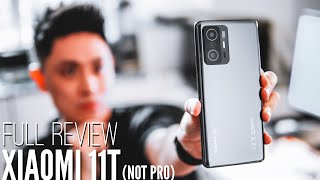