The device has room for two dual Nano-SIMs and supports connectivity from 2G to 5G. However, what the phone doesn’t have any room for, is an SD card. Coming to the phone’s dimensions, it measures 6.23 inches in height, 2.81 inches in width, and 0.28 inches in thickness. Speaking about how heavy or in this case, how light it is, it weighs at just 166 grams. This phone is easily one of the lightest phones out there, and if you aren’t fond of bulky devices, you should definitely consider this phone. The phone has a 6.55 inches OLED display with Dolby Vision and a screen-to-body ratio of 91.5%. The phone has an aspect ratio of 20: 9, with a screen resolution of 1080 x 2400 pixels, and a PPI density of 402. The phone can go up to 950 nits of brightness, meaning you would have no problem using it outdoors.

Looking at the aforementioned specifications, it’s safe to say that the multimedia experience on this phone should be pretty great. Staying on the subject of multimedia, the phone has hi-resolution audio and stereo speakers as well, but lacks 3.5 mm headphone jack. Coming to cameras, the phone has a triple-camera set-up on the back. It has a 64 MP wide-angle camera, an 8 MP ultra-wide camera, and a 2 MP macro camera. The rear camera set-up allows both 4K and 1080p videos. The back camera and video features include gyro-EIS, LED flash, HDR, and panorama. On the front, the phone has a 32 MP wide-angle camera for your selfie and video-conferencing needs. Unlike the rear-camera setup, the front camera only records videos at 1080p.

Coming to the topic of communication, the Xiaomi Civi has NFC, GPS, Bluetooth 5.2, Dual-band Wi-Fi, Wi-Fi Direct, and Hotspot. As far as sensors are concerned, the phone has an under-display fingerprint sensor, accelerometer, gyro, proximity, compass, and color spectrum. The smartphone has a 4500 mAh non-removable lithium-polymer battery, and it supports 55W fast charging as well. As per the advertisements, the phone can go from 0 to 100 percent charge in just 45 minutes. Besides, the device has USB Type-C 2.0, and USB On-The-Go. 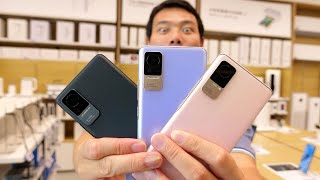 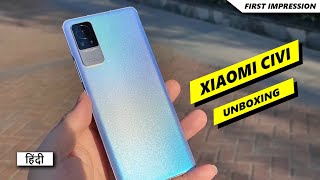