The Xiaomi Mi 10i 5G is a great option for those looking for a value for money affordable smartphone. The phone was released earlier this year on the 8th of January 2021. The device comes at a starting price of €250, which approximately converts to $281. On paper, the phone’s biggest highlight is its camera performance. In reality, only the main 108 MP wide-angle camera delivers a great performance, while the other three cameras fail to impress. Besides the 108 MP wide-angle camera, the phone has an 8 MP ultrawide, 2 MP macro, and depth sensor camera on the rear.

The phone not only has features like HDR and panorama, but also Dual-LED dual-tone flash. On the front, the phone features a 16 MP wide-angle camera for selfies, which does an acceptable job. As for video recording, Xiaomi Mi 10i 5G can go up to 4K. To ensure a smoother recorded video, the phone has gyro-EIS. The phone delivers a great overall performance thanks to the Qualcomm SM7225 Snapdragon 750G 5G processor. The Adreno 619 GPU, on the other hand, looks after the gaming and graphic requirements of the phone, which is further supported by the 120 Hz screen refresh rate.

In the AnTuTu benchmark test, the Xiaomi Mi 10i 5G scored 328730 points. On the software side of things, the device runs Android 10 with MIUI 12 on top. As is often the case, the UI is smooth, but the phone isn’t free from bloatware. Thankfully, you can uninstall most of those apps. You will have no issues with the build quality of the device, as both the glass front and back are protected by the Corning Gorilla Glass 5. However, you might have issues with the weight of the device. The phone weighs 214.5 grams while also measuring 6.51 by 3.02 by 0.35 inches. The memory type used here is UFS 2.2.

The phone comes in two configurations and both variants have 128 GB of internal storage, with 6 GB and 8 GB of RAM. If you want more storage, you can use an SD card, as the Xiaomi Mi 10i 5G has a Hybrid SIM slot. Therefore, the device can support up to two Nano-SIM cards and connectivity from 2G to 5G. For colors, you get to choose between Pacific Sunrise, Midnight Black, and Atlantic Blue. The multimedia experience offered by the phone is quite good, but it could certainly have been better. For instance, the phone uses an IPS LCD panel and at this price, Xiaomi could have provided an AMOLED one.

The phone has a 6.67-inch IPS LCD FHD+ screen with an aspect ratio of 20:9. In addition, the phone has a screen-to-body ratio and PPI density of 84.6% and 395 respectively. Xiaomi Mi 10i 5G doesn’t have an incredibly bright display, but you will still have a pleasant time consuming audio and video content on this phone. The phone’s multimedia experience is further improved by the presence of high-resolution audio, stereo speakers, and a 3.5 mm headphone jack.

For sensors, the device has an accelerometer, gyro, proximity, compass, and a fingerprint sensor on the side. In the communication department, the phone has Wi-Fi, Bluetooth, GPS, and USB Type-C 2.0. The device not only has FM Radio but an infrared port as well, both of which aren’t commonly found. The device has a 4820 mAh lithium polymer non-removable battery with support for 33W fast charging. Post full charge, the Xiaomi Mi 10i 5G should last for close to 1.5 days on average use. 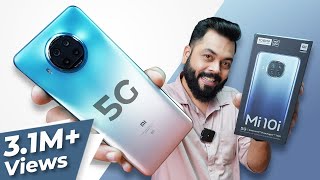 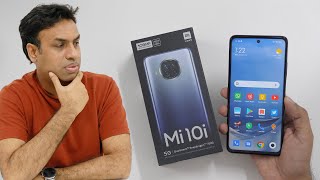