Having announced the Xiaomi Redmi 10 on the 18th of August 2021, the company launched the aforementioned phone just two days later on the 20th of August 2021. The phone is powered by the MediaTek Helio G88 processor, which is based on the 12nm technology. It has an octa-core processor, and its AnTuTu benchmark score is 238519. Coming to the phone’s dimensions, it measures 6.38 inches in height, 2.97 inches in width, and 0.35 inches in thickness. The smartphone weighs 181 grams, which is definitely on the lighter side.

The Xiaomi Redmi 10 runs Android 11 out of the box, while the Android skin is MIUI 12.5. Mali-G52 MC2 handles the gaming and graphic needs of the phone. The device has a refresh rate of 90 Hz, which is nice to see considering it doesn’t come with the standard 60 Hz refresh rate. The smartphone has a 6.5 inches FHD+ screen, with a screen resolution of 1080 x 2400 pixels, a dot display, and an aspect ratio of 20:9. It has an LCD panel and the screen is protected by the Corning Gorilla Glass 3.

The screen-to-body ratio is 83.4% and the PPI density is 405. Coming to cameras, the phone has a quad-camera setup on the back. It has a 50 MP wide camera, an 8 MP ultra-wide camera, a 2 MP macro camera, and a 2 MP depth sensor camera. On the front, the device has an 8 MP camera for selfies and video calls. Both 720p and 1080p videos can be recorded with the front and back camera setup. The phone has dual speakers, and it also retains the 3.5mm headphone jack.

The device supports dual-band Wi-Fi, Wi-Fi Direct, Hotspot, and Bluetooth 5.1. It has GPS along with GLONASS, GALILEO: E1, and Beidou. The Xiaomi Redmi10 supports FM Radio and has an infrared port as well. The mobile phone has a proximity sensor, ambient light sensor, accelerometer, electronic compass, vibration motor, and the amazing IR Blaster, that allows you to control your TV, AC, and other devices through your phone. For added security, you can also use the Face Unlock feature on this phone. Coming to the battery, the device has a massive 5000 mAh lithium-polymer non-removable battery. The phone supports fast charging, reverse charging, and has a USB Type-C 2.0. Looking at the specs, the battery backup and the charging experience should be nice. 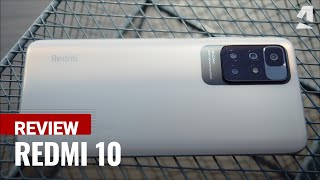 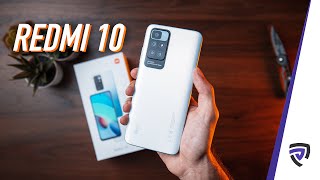