If you are on a tight budget and looking for a phone that has a great battery life, you can’t go wrong with Xiaomi Redmi 10A. However, if your main priorities are overall performance and camera performance, you should go for rival phones. Speaking of battery life, the phone lasts for around two days on average use, which is excellent. The device has a 5000 mAh Li-Ion battery but doesn’t support fast charging. Therefore, it will take a long time to charge the device from 0 to 100%. The absence of a USB Type-C Port is certainly a disadvantage, but it’s not surprising, since many budget phones do that.

Instead, the phone has microUSB 2.0. It also has GPS, Bluetooth 5.0, dual-band Wi-Fi, and a Hotspot. The phone’s overall camera performance is average. Xiaomi Redmi 10A has a 13 MP wide-angle and 5 MP macro camera on the back and front respectively. The selfie camera turns in an ordinary performance, while the rear camera delivers good results in well-lit environments. In low lighting conditions, even the rear-camera struggles, which isn’t a surprise to anyone. The phone has camera features like HDR and LED Flash. Both the rear and the selfie camera can record videos up to 1080p@30fps.

Another area where the phone is simply average is its display quality. Xiaomi Redmi 10A has a 6.53-inch HD+ IPS LCD screen with an aspect ratio of 20:9. While the PPI density of 269 is less than impressive, the screen-to-body ratio of 81% is decent. The device can only go up to 400 nits of brightness, which means you will have to look for shades while answering your phone outdoors on a bright day. The loudspeaker’s performance is, once again, average. Therefore, we recommended using an earphone for an improved multimedia experience.

The MediaTek Helio G25 chipset delivers smooth performance, as long as you’re limited to day-to-day tasks. However, when you switch from one app to another with multiple ones already open in the background, you will have to deal with lags. The GPU used here is PowerVR GE8320 and the phone can handle light gaming. It’s not meant for heavy tasks, though, as you can already guess. On the software side of things, the device runs Android 11 out-of-the-box with MIUI 12.5 on top. Expectedly bloatware is present on Xiaomi Redmi 10A.

The phone’s sensors include an accelerometer, proximity, and a rear-mounted fingerprint sensor. Design is a department where the phone is awesome. While you do get a plastic back and frame, the phone is sturdy. The plastic back panel has a matte finish, so you need not worry about it attracting fingerprints. Xiaomi Redmi 10A weighs 194 grams and measures 6.49 by 3.04 by 0.35 inches. There is an issue with the phone’s design, though. Reaching the rear-mounted fingerprint sensor isn’t an easy task, as the phone is big. Needless to say, the device isn’t meant for single-hand use. 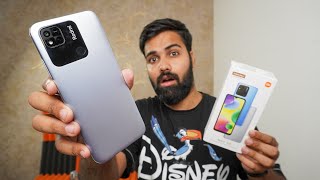 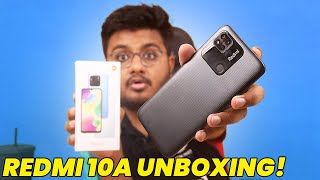