Apart from an SD card, the device can support two Nano-SIM cards and connections from 2G to 4G. For color, the options are Carbon Black, Coral Green, and Metallic Purple. The biggest highlight of the Xiaomi Redmi 9 Activ is its battery and overall performance. The phone has a 5000 mAh lithium polymer battery that supports 20W fast charging. On average use, the phone should easily last you for well over a day. However, it should be mentioned here that you will only get a 10W charger in the box of this device.

MediaTek MT6765G Helio G35 processor handles the overall performance of the phone, which is pretty smooth. The phone’s gaming performance is handled by the PowerVR GE8320 GPU. On the software side of things, the phone runs Android 10 with MIUI 12 on top. For a phone that was launched in September 2021, the phone should have come with Android 11. This is a major con of owning the Xiaomi Redmi 9 Activ. The Xiaomi Redmi 9 Activ has a score of 203078 points in the AnTuTu benchmark test. The build quality of this phone is average, as it feels sturdy despite its plastic body.

What also increases the appeal of this device is that it has a water-repellent coating. The phone measures 6.49 inches in height, 3.04 inches in width, and 0.35 inches in thickness. The device weighs 194 grams, but it definitely doesn’t feel light in hand. The phone has a 6.53-inch IPS LCD HD+ screen whose screen resolution is 720 x 1600 pixels. Besides, the phone has a screen-to-body ratio of 81%, and it can go up to 400 nits of brightness. The multimedia experience Xiaomi Redmi 9 Activ offers is just average.

The audio experience is supported by the presence of a loudspeaker and a 3.5 mm headphone jack. The display quality could have been better, but that’s often the case with most budget smartphones. As for sensors, this smartphone has an accelerometer, proximity, and a rear-mounted fingerprint sensor. The overall camera performance delivered by the phone is below average, while it really struggles in low light.

On the rear, the phone has a 13 MP wide-angle and 2 MP depth sensor camera. The camera has features like LED flash and HDR and can record videos in 1080p. The Xiaomi Redmi 9 Activ also has a 5 MP wide-angle camera for selfies and video calls. For communication, the device has microUSB 2.0, USB On-The-Go, GPS, Bluetooth 5.0, Wi-Fi, and Hotspot. Also, the device has FM Radio but lacks support for NFC. 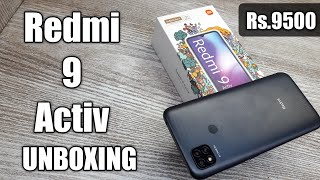 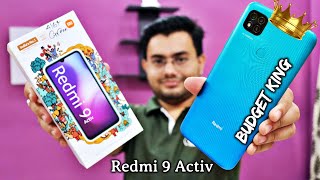