As for the connections, the phone can handle 2G, 3G, and 4G. For colors, you get to choose between Graphite Gray, Pearl White, and Star Blue. The phone measures 6.30, 2.91, and 0.32 inches in height, width, and thickness respectively. Xiaomi Redmi Note 11 has a plastic body, but it doesn’t feel cheap. The device weighs in at just 179 grams, which is pretty impressive. What’s equally remarkable is that the device has IP53 certification for dust and splash protection. This is uncommon among phones in this category.

The multimedia experience delivered by the phone is amazing. The phone has a 6.43-inch FHD+ AMOLED screen protected by Corning Gorilla Glass 3. The device has a screen-to-body ratio of 84.5% and a PPI density of 409. It can go up to 1000 nits of brightness, so you won’t have a problem using it outdoors. The experience is also improved by the presence of high-resolution audio, stereo speakers, and a 3.5 mm headphone jack. On the software side of things, the Xiaomi Redmi Note 11 runs Android 11 with MIUI 13 on top.

Seeing how the phone was launched on the 9th of February 2022, it should have come with Android 12. The UI is a lot smoother than the previous versions. You do get a few unnecessary pre-installed apps on this phone, but most can be removed. The Qualcomm SM6225 Snapdragon 680 4G processor delivers acceptable performance, but it’s not for heavy tasks. Therefore, it’s not for gaming. The Adreno 610 GPU looks after the phone’s gaming requirements.

For sensors, the device has accelerometer, gyro, proximity, compass, and a side-mounted fingerprint sensor. The phone has a 5000 mAh lithium polymer non-removable battery that supports Power Delivery 3.0. It also supports 33W fast charging and Quick Charge 3+. According to the ads, Xiaomi Redmi Note 11 can go from 0 to 100% in an hour. If you are an average user, the phone will easily last for one and a half days between charges. In the communication department, the device has Wi-Fi, dual-band, Wi-Fi Direct, hotspot, Bluetooth 5.0, GPS, USB Type-C 2.0, and USB On-The-Go.

The gadget not only has NFC but also Infrared, which is unusual nowadays. Coming to cameras, the overall performance is okay, but the secondary camera could have been better. The phone has a quad-camera setup on the back. It has a 50 MP wide-angle, 8 MP ultrawide, 2 MP macro, and 2 MP depth sensor camera. For selfies, the Xiaomi Redmi Note 11 features a 13 MP wide-angle camera. The phone’s camera features include LED flash, HDR, and panorama and records videos in 1080p. 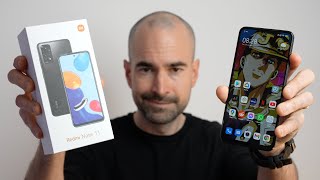 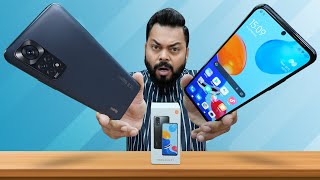