Important to realize, soundbars aren’t anything new. They’ve been around for a while, and way more common in the past when people had fewer TVs and PCs. At that time and age, you had to gather around a big TV. It was preferable to have fewer wires, way less time to install, and best of all – give good video and audio. That’s where soundbars came in, and that’s how we’ve gotten to the champion we see before us today. Yamaha YAS-203 is a great soundbar, although it has a few tiny flaws we found a bit annoying, and it’s up to you to decide.

Let’s start with specs of Yamaha YAS-203. The one we see is so beautiful, let us tell you. It’s black, it isn’t too big, and it’s pretty long. You will find a subwoofer in the package, while the main body is constructed of plastic. You can either put it on a shelf, near the TV or mount it on the wall. It doesn’t matter, the quality of sound when it comes to the soundbar stays the same. A good thing is certainly the LED indicators installed, which will easily let you know what’s going on.

Moving on, in order to give a sense of control, you’ll receive a controller. Thankfully, it’s not the type of controllers we’re used to, 3 buttons and done. No, Yamaha YAS-203 controller has plenty of options and settings and allows you to get just it just right. Even if you’re a first-time user, there are tiny images and letter to help you navigate. Okay, now the sound specs of Yamaha YAS-203. It supports both Dolby Digital and DTS sound, which is a great thing to hear about. That means your home theater can be complete, and sound way better.

We’re so proud of this one, and we’d recommend it for watching movies, and our second choice for a soundbar would be LG SH7B. What’s more – even if playing from your phone, the quality will stay. That’s because it supports Bluetooth connections with aptX, which is something we see in today’s smartphones. Other than those, some other features of Yamaha YAS-203 are as follows: Clear Voice boost dialogue, Air Surround Xtreme sound processing, and more. They solved another issue, and it’s something we haven’t given a lot of thought. If an infrared port on your TV (that red dot under the screen) is blocked by the soundbar, that’s troublesome.

That’s why with this one you have an external, rear-mounted IR repeater. That way you can continue using your home system effortlessly. In the end, the most important part. How did Yamaha YAS-203 fare with watching a movie in a large room? Well, let us tell you – really great! When you sit centered in front of the screen, the sound is clear, loud and projects really well. A little bit of that is lost if you move all the way to the left or right. It fared well with Dolby and DTS compatibility, which some other soundbars are limited in. 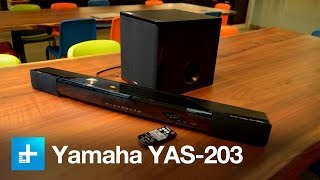 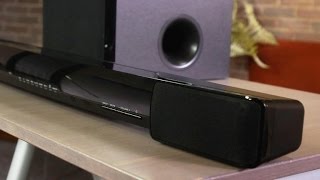 7.5
Post a Review Please note that each user review reflects the opinion of the respectful author. To get approved, make sure that the review is big enough and contains unique opinion.