Right off the bat, it’s important to take a notice of Yuneec Q500 4K Typhoon features that are prevalent. First of all, it’s cheaper than its competition, that’s for sure.  Of course, there have been compromises made when it comes to design to make sure the price is as low as it gets. You’ll mainly notice that when it comes to the body – it’s a lightweight, plastic chassis. We’re not too happy about that, but it’s not as fragile as you might think. While it probably won’t survive a straight-on collision with a big tree, we trust you know what you’re doing.

On top of the drone itself are four rotors, which is a standard thing. The camera is underneath it all and reminds us of an eagle carrying his prey. And what a prey that is! In a world where everything is focused on full HD 1080p video and audio, 4K still feels like far away and expensive. But, good news – that’s not the case here, as it has a 4k camera mounted on a gimbal. While it records at 30 fps only, that’s still a viable option, but you can tone it down to increase fluidity.

To clarify, if you decide to shoot in 2k or 1080p, you can get as much as 60 fps or even slow-motion 120 fps! It makes for a great effect while flying overhead, and will sure make your creation stand out. You might wonder – what about handling the beast? Will it fly away and you’ll end up losing your precious investment? Well, it won’t, and while you can fly it quite high, by law you’re required to keep visual with the drone at all times. Luckily, Yuneec Q500 4K Typhoon specs are quite good, and the drone is quite responsive, agile and just a pleasure to control.

It’s all thanks to ST10+ so-called Ground Station that brings its own features to the table. For example, it has two buttons, analog sticks, it’s based on Android, and you can watch all the action happen on a 5.5-inch display. That means there is no need to put your phone in jeopardy or have a specific mobile phone holder. We’ve already mentioned it’s made of plastic, and not nearly as durable as DJI Phantom 4, but the price of Yuneec Q500 4K Typhoon is way more affordable. Even though it gets wobbly in the air in windy situations, the camera footage doesn’t seem to be affected.

Of course, the drone can follow you or hover in one spot if you decide so. Additionally, you can choose two modes – Follow Me or Watch Me – both self-explanatory. The battery life is certainly not low, but we’ve seen better. Furthermore – you get two 5400 mAh batteries. Each of those will last you between 20 and 25 minutes of flight. It’s important to realize – if you use those autonomous modes, battery juice will go down faster. With that in mind, it might be a great idea to fly it manually. There’s a good thing about charging them – you can plug it almost anywhere – for example, in your car’s cigarette lighter. The bad thing – it takes about two hours to charge it fully. 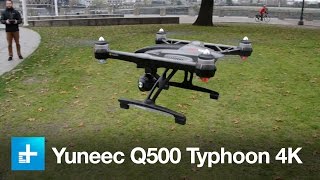