ZTE Axon 40 Ultra is a great option if your main priorities are battery life, display, and overall performance. However, what makes this phone memorable is the presence of an under-display selfie camera. As a result, the phone’s display isn’t interrupted by a notch, unlike most other phones. ZTE has done a good job of hiding the 16 MP wide-angle selfie camera to a significant extent. Where we certainly won’t use “memorable” is for describing the phone’s selfie camera. It’s best-rated as substandard. On the back, the phone has a 64 MP standard, periscope telephoto, and ultrawide camera.

The gadget’s overall camera performance is decent, while the main camera is awesome. It doesn’t do well in low lighting conditions, which shouldn’t be the case considering its price. All three cameras support PDAF while the first two cameras support OIS. Dual-LED dual-tone flash, gyro-EIS, HDR10, and 10‑bit video are among the phone’s camera features. As for video recording, the selfie camera can do so in 1080p@30fps, while the rear camera can do so up to 8K@30fps. ZTE Axon 40 Ultra has an awesome battery life as it lasts for close to 1.5 days on average use. The gadget has a 5000 mAh Li-Po non-removable battery.

What makes the phone even better in the battery department is that it supports 65W fast charging. Additionally, it supports USB Power Delivery 3.0 with PPS which is a rarity. Connectivity options include USB Type-C 3.1, USB On-The-Go, NFC, GPS, Bluetooth 5.2, dual-band Wi-Fi, and Hotspot. Performance is super smooth, as you would expect from a phone with a Qualcomm Snapdragon 8 Gen 1 chipset. The same is the case with the gaming performance delivered by the Adreno 730 GPU. On the software end, ZTE Axon 40 Ultra runs Android 12 out of the box with the skin being MyOS 12. Coming to the sensors, the device has an under-display fingerprint sensor, accelerometer, gyro, proximity, and compass.

Its display quality is good as well. ZTE Axon 40 Ultra has a 6.8-inch FHD+AMOLED screen with a refresh rate of 120 Hz. It not only has support for HDR10+ but can also go up to 1500 nits of brightness, which is appreciable. Considering the segment, it has a decent PPI density of 400 and a superb screen-to-body ratio of 93.1%. While the phone does have stereo speakers, its quality could have been better. This certainly hurts the multimedia experience to an extent. The phone lacks a headphone jack, but it has high-resolution audio. As for its design, the phone has a glass front and back with an aluminum frame. 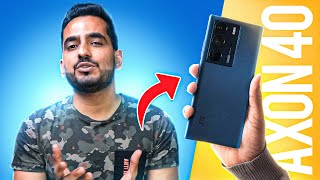 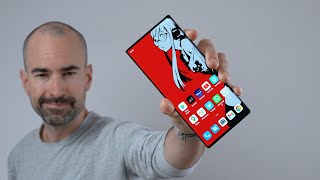